In 2014 an undefeated Dae Hwan Kim challenged for the ONE Championship bantamweight title. He was submitted by Bibiano Fernandes, suffering the first loss of his career.

While there is no shame in being beaten by the long running bantamweight champion the loss seems to have been a tipping point for Kim. Having never previously been beaten he has lost as many as he has won since that unsuccessful title tile.

Kim comes into ONE: ‘Battleground’ Part III on the back of a three fight losing skid that has caused him to completely reassess his style and skillset. The fight against Xie Wie is being broadcast on Friday and the Korean says he has made some recent improvements, 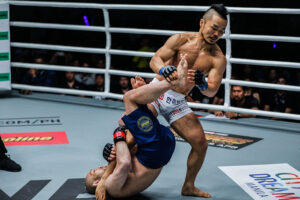 Having been the distance in his last three fights and come up on the wrong end of a decision defeat every time Kim plans to seize the initiative against Wie,

“I’ve tried to change my game plan for this bout. I thought I should be more aggressive, just like how I was in the beginning of my career.”

He will also make some tweaks to his strategy, 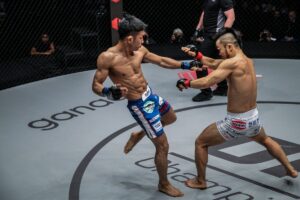 The Chinese fighter is a standup specialist who doesn’t have a single submission win on his record. Kim is aware of his opponent’s strengths but believes Wie is not versatile enough to pose a real threat,

“I figured his strength was in his boxing and his wrestling defense, but that strength is also his weakness because he’s only good in boxing,” Dae says.

The Korean has faced Chinese fighters on three previous occasions and emerged victorious every time. More importantly he has a background in Muay Thai and believes he is better than Wie in multiple areas,

“When it comes to Muay Thai knees, elbows, kicks, offensive wrestling, and jiu-jitsu, I think he is lacking in those areas.”

Many fighters find their undefeated record doesn’t last long once they sign with ONE Championship. Kim has been on the roster for nine years and nearly reached the pinnacle of the bantamweight division, now the challenge for the 34 year old is to prove he can still compete with the best by snapping the longest streak of his career.