Dae Hwan Kim has fought for the bantamweight belt before. He came up short against Bibiano Fernandes in 2014 but the Korean’s fortunes are on the upturn and the title picture has changed dramatically in the last year.

Kevin Belingon, who Kim holds a quickfire submission win over, currently holds the bantamweight belt. Meanwhile the Korean is riding a two fight winning streak and will be looking to make it three in a row when he takes on Shuya Kamikubo at ONE: ‘Clash of Legends’.

Kim has a recent win over Japanese MMA veteran Masakazu Imanari. But Kamikubo is an up and coming young star riding a five fight winning streak and represents a very different type of challenge.

It’s a challenge that the Korean will be prepared for,

“I think he is a good athlete. I viewed video footage of his ONE Championship bouts, and I think he’s a good wrestler who is adept at keeping up the pressure,” Kim says. 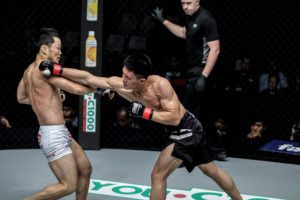 Kamikubo finished his first ONE Championship fight late in the second round while his last match went the distance. Kim was impressed by his opponent’s stamina,

“He didn’t get tired through all three rounds and was able to keep up the pressure. His positioning on the ground and his jiu-jitsu skills appear to be his strengths.”

Kim comes from a Muay Thai background but six of his 14 wins have been by way of submission. He thinks these striking skills will be his key to victory on Saturday,

“I am a mixed martial arts fighter, but my strength lies in my striking ability, and I can spot weaknesses in his striking ability. He has a punching-oriented style, while there isn’t a lot of kicking, knee strikes or elbow strikes.” ONE Championship has an event scheduled for Seoul on December 20th. If Kim can continue winning then he looks certain to be on that card and the 32 year old has seen his profile rise since signing for Asia’s biggest MMA promotion.

He started out with the now defunct Spirit MC promotion in 2008 and has seen Korean MMA grow in the last 11 years,

“Back then, there was no broadcast coverage while only a small handful of news media covered the event. These days two different broadcasters cover ONE Championship matches while public awareness has increased a lot.” Since signing for ONE Championship Kim has never managed to win three fights in a row. He’s put together back to back victories on three separate occasions and will be looking to prolong his current streak at the Impact Arena on Saturday.

Given the caliber of his upcoming opponent Kim is well within his rights to believe a third straight win would thrust him directly into the title picture. The stakes a are high and that gives this matchup particular significance,

“Every match is important for me but, if I win this time, I believe I will take a step closer to the title,” Kim said. Kim’s five ONE Championship wins have all come by way of submission or decision. It shows that he has become a truly well rounded mixed martial artist but the Korean has never strayed too far from his Muay Thai roots.

“I’ve played all of my matches so far with one intention; to knock out my opponents.”

There’s five Muay Thai fights on the ONE: ‘Clash of Legends’ card. But Kim hopes it will be his striking skills that steal the show in Bangkok on Saturday.