Daichi Takenaka watched Ivanildo Delfino lose to his compatriot Tatsumitsu Wada at ONE: ‘Fire & Fury’. The Brazilian had won eight fights out of eight heading into that contest but did not look like an elite prospect as he dropped a decision to the experienced Japanese flyweight.

Takenaka will be making his flyweight debut this Friday at ONE: ‘Unbreakable’ Part II, which is being broadcast on a delay. He thinks there is more to Delfino’s game than the Brazilian showed on his promotional debut,

“When I saw that bout, I thought he was eerie. I wondered if he had some hidden weapon. In the end, there was nothing, and it went to a decision, even though there seemed to be something.”

When asked to expand on what he meant by ‘eerie’ Takenaka said,

“He had a pretty good fight record, and I think he won a lot via submission, but I wondered if his performance in the bout against Wada was by the real Delfino. He didn’t show much urgency to aim for the knockout or go for the takedown, which was eerie.” 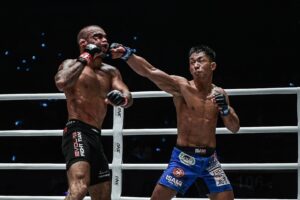 Takenaka has only fought four times since signing for ONE Championship in 2016. He is hoping to be more active this year,

“The ideal scenario (is) to do about three fights. I want to compete against some of the top-ranked fighters.”

He will be competing at flyweight for the first time, having spent his entire career at bantamweight. Takenaka explains the decision to drop down a division as follows,

“I decided to drop down to flyweight and from January to February of 2020, I was losing weight. I was trying to see if I could lose weight and move to flyweight properly. That was in January. From there, I received another bout offer from ONE Championship in April, but the fight was postponed due to Covid-19.” Takenaka is known as a grappler but has used the break to become more well rounded. He did not fight at all in 2020 but has spent the time off studying the stand-up game

He says his coaches have seen a big improvement in terms of his speed,

“When I’m sparring, my training partners and cornerman tell me that my punches are getting faster, and I feel that the punching speed is getting faster.”

“My training buddies and cornerman say that judging only from Delfino’s bout against Wada, I should be able to finish him. I think I need to win, at the very least.”

The 30 year old has also given a lot of thought as to how he would like the fight to finish,

“I’ve been developing my boxing pretty seriously so I think I’ll win by KO with punches or by rear-naked choke. In the first round, I want to damage him with many strikes, and either in the second or third round, I want to KO him with strikes or submit him.” He sees Delfino as something of an unknown quantity and is conscious that the Brazilian could put in a much improved performance,

“I didn’t know what he was capable of, so I guess that’s why I said ‘eerie’. If you know what your opponent is skilled at, it is easier to make a strategy even if the opponent is strong.”

However he has left nothing to chance in preparing for this fight and has been working on every area of his game,

He hasn’t been doing anything too specific to prepare for Delfino. Takenaka has focused on himself, instead of his opponent, and feels his all round ability will be enough to win the day and make it a successful flyweight debut,

“I don’t prepare countermeasures and just try to show what I am good at. This is my first fight after dropping a weight class, and I’m going to give a performance that will make people think that Daichi Takenaka can aim for the top.”