Dejdamrong Sor Amnuaysirichoke warns he is no stepping stone ahead of ONE: ‘Battleground’ Part III

Dejdamrong Sor Amnuaysirichoke was the first ever ONE Championship strawweight champion. The Muay Thai veteran won his first six fights, capturing the newly minted title in the process.

Since then the 42 year old’s form has been more mixed but Dejdamrong has proved he is no pushover even as he comes towards the twilight of his combat career. He has won three out of his last five fights and believes he remains a tough test for anyone in the division.

His opponent at ONE: ‘Battleground’ Part III will be Duoji Banma. The Chinese fighter is 20 years his junior but Dejdamrong is adamant that he is no stepping stone,

“Rising stars will use us as a ladder to higher rankings. But I want to tell (Banma) that winning won’t be easy. Train hard, and don’t underestimate an opponent like me.” 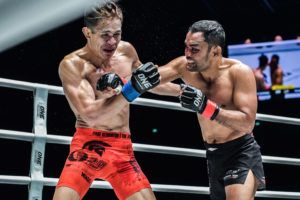 This will be the third time in four fights that Dejdamrong has faced a Chinese opponent. He lost the last two and will be wary of his opponent’s ground game and wrestling,

“For his ground game, I haven’t seen anything intimidating. However, as a younger and fresher fighter, I also believe he will definitely try to take the fight to the ground during the match. So, I’ve had to train more ground fighting to be able to defeat him.”

Having been knocked out by an uppercut from Miao Li Tao at ONE: ‘Enter the Dragon’ the Thai veteran knows he will have to avoid ending up on the receiving end of his shot,

“He’s a good stand-up fighter and has very dangerous uppercuts. I would say his striking and combinations are quite scary. Plus, I was knocked out before. So, I have to train very hard and be very careful of this,” he said. As a veteran of around 300 Muay Thai fights Dejdamrong should have an advantage over just about anyone in the striking exchanges. He wants to use his weapons but won’t be afraid to take the fight down if an opportunity presents itself,

“I’ll mostly use elbow and knee strikes if it’s a close-range fight. These are the destructive weapons that I always use for Muay Thai. It’s the fighting I’m good at. But I’ll be ready for his attack, and whenever I see an opportunity or a gap, I’ll take him down.”

Dejdamrong does have three submission fights on his record and won his most recent contest with ground and pound. So he won’t hesitate to take the rising Chinese star down,

“I will fight both standing up and on the ground. If he fights with me standing up, I’ll fight standing up. But if I have a chance, I’ll also take him down and apply what I’ve trained for,” he says. Despite having a couple of knockout losses on his record Dejdamrong is very confident in his striking and will probably play to his considerable strengths,

“That’s what I’m good at. With my defense, weapons, stand-up fighting, and everything I’ve learned from Muay Thai, I can defeat him. So, if I have a chance, I’ll use Muay Thai weapons to end the fight as soon as I can.”

With Dejdamrong having been on the wrong end of one punch knockouts one a couple of occasions opponents might be tempted to go head hunting in search of that highlight reel finish. There aren’t many fighters who can say they have stopped a former Lumpinee champion with a single punch.

But if Banma is planning to test Dejdamrong’s chin the That warns he will be glad to stand and trade with the younger man and see who has the superior striking,

“If you want to stand with me and strike, I’ll give you a taste of Muay Thai, and you’ll see how dangerous it could be.” Urijah Faber: ‘Sage was in a scary place’! 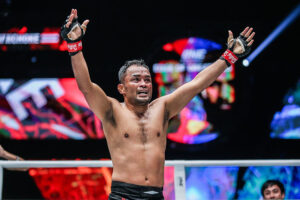