The Taliban famously banned MMA after seizing power in Afghanistan. Many of the country’s fighters and promoters promptly fled the country but Ahmed Wali Hotak stayed behind and his success appears to have led the government to have second thoughts about the sport.

Hotak beat a journeyman opponent in Russia last month. Upon returning to Afghanistan he was honoured by some of the most powerful men in the country.

In these photos Hotak can be seen receiving some sort of gift from Fazl Al-Hadi Muslimyar who is the senate chairman:

Also posing with Hotak are other Afghan officials although we don’t know there identities. We do know that the Taliban aren’t big on things like equality and women’s rights.

At present women aren’t allowed to work or even leave their house without a burqa on. Girls are also not allowed to attend high school which means that they have no chance of ever being admitted to a university.

“(It) has documented persistent allegations of extrajudicial killings, arbitrary arrests and detentions, and torture and ill-treatment carried out by the de facto authorities.”

But with very little access to the country for foreign media or NGOs it is not always clear what is happening in Afghanistan and it appears the Taliban’s ban on MMA might not be quite as strict at had initially been reported.

Hotak was permitted to hold a press conference in Kabul before travelling to Russia for Fight Nights 113. He went on to beat Vladimir Osipov by decision to take his record to 11-1.

The welterweight appears to have received a hero’s welcome upon his return to Afghanistan. The eagerness of leading Taliban figures to pose with him is at odds with the idea that the regime has totally banned MMA.

Unfortunately foreign media aren’t welcome in Afghanistan right now so no-one got the opportunity to ask Fazl Al-Hadi Muslimyar what he thought of last weekend’s UFC card, or who his favourite fighter is. But it seems the Taliban isn’t actually against people training and competing in MMA, just as long as they aren’t women. 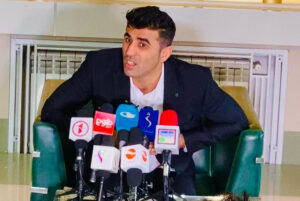