South Korean prospect Doo Ho Choi may be on a tough career skid, but he fully expects to snap his losing streak and use his upcoming featherweight match-up as a springboard to future success.

The 28-year-old prospect from Gumi is set to square off with Canadian standout Charles Jourdain at UFC Fight Night Busan this Saturday.

As the three-round encounter draws near, Choi is far from tense. He does not feel any pressure and, truth be told, he is excited.

“I do not put any pressure on myself. I like to compete comfortably. I am looking forward to claiming the victory. I intend to put on a good match and leave the fans happy,” he said through his interpreter.

Choi has demonstrated incredible talent, putting the division on notice by scoring three first-round knockout wins in a row to kickstart his UFC run. 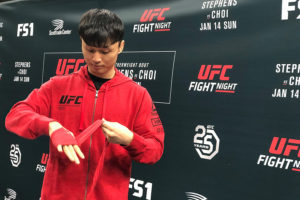 Unfortunately for ‘The Korean Superboy’ he has not produced favorable results as of late. Choi has lost his last two octagon assignments, albeit all against elite opposition such as Cub Swanson and Jeremy Stephens.

It may be a do-or-die situation for Choi as another loss could put him dangerously close to the UFC’s cut line,

“This is a chance to show the world that I can give them a good show on the sport’s biggest stage, not just a simple win. With an exciting fight and remarkable performance, it will eventually give me the convincing victory,” he stated.

According to Choi, his string of setbacks has given him a new fire to compete even harder on Saturday.

“This encourages me. I am ready to give it my all just to be victorious in this fight,” he declared. 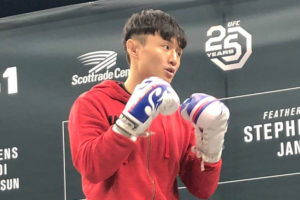 To test him in his first bout of 2019 is Jourdain. This past May, the 24-year-old Canadian made his maiden UFC appearance in a losing effort, bowing to Desmond Green by way of unanimous decision.

Choi realizes that, like him, Jourdain is motivated to get back on the winning track. Though he absolutely respects what his opponent brings to the table, the South Korean is very confident that he will walk away with his hands raised in triumph,

“My opponent is a complete martial artist. I am impressed but it does not matter if he wants to battle standing or on the ground. I am ready for this. He is an experienced guy. It does not scare me though,” he warned.

Choi lost nearly two years of active competition due to injury but believes that a win on Saturday would show that he is well and truly back,

“This is the start of a new chapter. I will get this win and establish a new streak of victories. I am not going anywhere,” he said.