Emi Fujino is still going strong in the twilight of her career. The veteran returned to winning ways with a unanimous decision win over Ayaka Watanabe at Pancrase Neo Blood on Monday.

Fujino has been in with some of the best fighters in the world including Weili Zhang and Seo Hee Ham. But the 41 year old appeared to be slowing down having suffered back-to-back defeats against Ayaka Hamasaki at Rizin 30 and Karen Pravajra at Pancrase 326.

In the first round Fujino countered Hamasaki’s low kicks well with her right hand and caught her opponent with one-two’s when she came into close range. The 25-year-old had her kick caught and was forced back into the cage before being clocked with some right hooks and jabs. The former strawweight Queen of Pancrase champion marched forward with a left-right combination in the second stanza. Again she mastered the range early and began finding joy by adding low kicks at the end of her combinations.

It was a similar story in the final round as Watanabe sought to put more power behind her punches but was outclassed by the poise and timing of her opposite number giving the judges an easy job. All three declared Fujino the winner and she improves to 26-13 while her opponent drops to 1-1.

Fujino has her eyes set on another crack at the belt,

“Watanabe, who accepted the match in a hurry, was very strong. So I’m going to aim for the championship again,” she said. 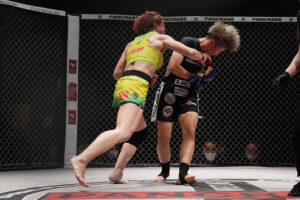 Darani Pravajra made some headlines by wearing an outfit to the weigh ins that left almost nothing to the imagination. Yusuke Amari did not look impressed and  got his revenge with a TKO win that takes him to 2-1 while his exhibitionist opponent drops to 13-18-9.