Fabricio Andrade didn’t win the bantamweight belt at ONE on Prime Video 3 last weekend. But he did come good on his pre fight promises to turn legendary striker John Lineker into a wrestler.

Andrade busted up the eye of his fellow Brazilian so badly that Lineker started shooting for takedowns in the opening round. He also kneed the former champion in the midsection so hard hard that he was doubled over in pain.

So there were plenty of positives for Andrade even though he walked away without the belt. If anyone was expecting the 25 year old to have sounded more humble in the wake of the no contest they would have been disappointed.

He took to Instagram to taunt Lineker and point out that he succeeded in turning the UFC veteran into a wrestler:

Lineker was unable to continue after getting kneed in the groin in the third round. But Andrade has no sympathy whatsoever for the 32 year old.

He thinks that Lineker was looking for an excuse to quit and the knee to the groin was very convenient for the former champion, who had already lost his title at the scales. The veteran’s cup was smashed but Andrade is not convinced it was his strike that did the damage.

Speaking afterwards he scented conspiracy in the air and suggested that the damage to Lineker’s cup might have been pre existing:

Andrade said he was feeling ‘confident and comfortable’ at the time of the stoppage. The challenger certainly seemed to be firmly in control of the fight and had hurt Lineker badly with a knee to the midsection moments before.

A rematch seems like the obvious move but Andrade is not convinced Lineker will take the fight and says he is open to facing other opponents,

“He took the easy way out. The guy is running from me for a long time, he comes here he doesn’t make weight and now he gives up on the fight like that. I don’t believe he wants to face me, I can rematch him anytime but I don’t think this guy wants to rematch with me so lets put another guy in line for the title.” 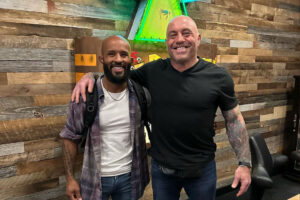