Frank Camacho signed with the UFC in 2017 but has yet to register back to back wins in the octagon. He is coming off a victory over Nick Hein and is hoping to make it two in a row on Saturday.

Camacho is set to face Beneil Dariush in a three-round lightweight contest at UFC Singapore. The native of Northern Mariana Islands, Saipan sees it as an opportunity to put together his first winning streak for the promotion,

“It’s a chance for me to get my second straight win. I’ve never had a streak of wins in the UFC yet. This is my shot. Of course, I need to be consistent in what I do, so this bout is important to me,” Camacho said.

Camacho holds the distinction of being just one of three fighters to start their UFC run with three performance bonuses. But he has had his fair share of highs and lows, losing three of his first four fights for the promotion. 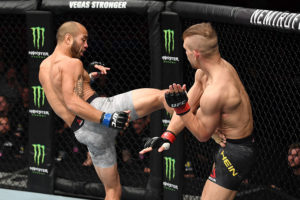 His all-action style earned him a new four-fight deal with the company. While he enjoys getting the crowd on their feet Camacho knows that it is ultimately a results business,

“I love putting a show for the people, but at the same time, I need to win. It’s a jungle out there. I won in my last fight, but I need a good follow-up for that victory to at least justify that the UFC made the right decision in renewing my contract,” he said.

Camacho believes Dariush represents a step-up in competition. His has been part of the UFC lightweight locker room since 2014 and has shared the cage with the likes of Charlie Brenneman, Michael Johnson, Michael Chiesa and Edson Barboza.

Camacho acknowledges his opponent’s experience and toughness but pledges to do whatever is necessary to achieve victory,

“You’ve got to go in there and fight. I do not think about him that much, but he is a veteran fighter,” he said. 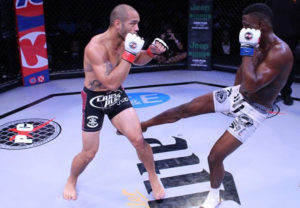 Ultimately Camacho says he is more focused on himself than his opponent,

“At the end of the day, it is a fight. I just think about myself and improving. Sometimes, there is no game plan. You just go in and give everything you’ve got.”

Camacho’s unpredictable nature makes him an awkward opponent, as well as a fan favourite. He thinks this makes fighting him a tricky prospect for opponents,

“Creativity is definitely a thing I feel out. If I can go for it, I go for it. That is how I measure my aggressiveness in the cage versus my control. If I was fighting a guy that was always doing something new, I would be a little intimidated.” 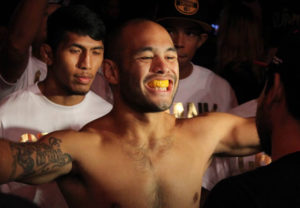 For this encounter with Dariush, Camacho returned to Irvin, California for a six-week camp with Team Oyama. He used the Southern California-based training facility for the fight against Hein and is hoping for a repeat of that result,

“I’m glad I jumped straight back into camp. With my new team, I have it more dialed in. The last fight camp was really trusting in the process, trusting in my nutritionist, trusting in my coaches, and trusting my training partners. All I have to do is focus and just train hard,” he said.

On Saturday Camacho intends to unleash the same energy and intensity he is renowned for,

“We are just going to bring it just like we always do. I can’t wait to get back in there and represent the Marianas the best that I can, like I always do, with the island fighting spirit.”