UAE Warriors 18 is set for Abu Dhabi on March 20th. The full fight card was released yesterday and it features a catchweight clash between UFC veterans Sean Soriano and Noad Lahat.

Lahat (13-4) is one of two Israeli fighters on the card.  The 36 year old has fought ten times for the UFC and Bellator but has been out of action since 2018.

Soriano (13-4) had three fights for the UFC and lost them all, including a notable decision defeat to Tatsuya Kawajiri in Singapore. He is riding a two fight winning streak and has been more active than his opponent.

In the lightweight division Anas Siraj Mounir (9-2) has been matched with Joachim Tollefsen (5-2-1). The Moroccan has spent the majority of his career competing in the Middle East while the Norwegian made his name on the regional UK scene.

Juares Dea (7-3) is coming off an unsuccessful title shot at UAE Warriors 14. The Cameroonian dropped a decision to champion Xavier Alaoui and will be looking to get himself back into contention when he faces Jalal Al Daaja (7-5)

As previously announced the event at the Jiu Jitsu Arena will be headlined by a bantamweight title fight with Alaoui making the first defence of his belt against Vinicius de Oliveira. UAE Warriors 17 takes place in the same venue the previous night. 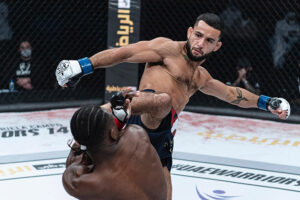