After devastating defeats in MMA Garry Tonon and Shinya Aoki will both be returning to submission grappling. The two BJJ black belts were both stopped by strikes in their most recent bouts.

They will be in action in submission grappling bouts on May 20th against the Routolo twins. Tonon is taking on Tye Ruotolo while Aoki is facing Kade Ruotolo with both matches set for lightweight.

In the past submission grappling contests on ONE Championship cards would be declared a draw if the fight went the distance. But moving forwards the fighter with the highest number of ‘real’ submission attempts will be declared the winner.

Submission grappling bouts are becoming a regular feature on ONE Championship cards. At ONE: ‘X’ Andre Galvao faced Reinier de Ridder while Danielle Kelly took on Mei Yamaguchi with both bouts ending in a draw.

These draws look set to be a thing of the past under the new criteria. Chatri feels that ‘a part of the essence of jiu-jitsu has been lost in the last several years’ and blames the scoring criteria in the sport which encourages fighters to stall.

The ONE Championship CEO believes that ‘the true essence of the gentle art has always been to finish fights’ and wants to see fighters rewarded for trying to do just this. He has been signing up some of the top BJJ and no gi grappling prospects on the planet.

The Ruotolo brothers are BJJ black belts under Andre Galvao. They are just 19 years old and have earned a reputation for taking on and beating much older and more experienced grapplers.

Aoki and Tonon are probably better known for their exploits as mixed martial artists. The Japanese veteran is a submission wizard and a former ONE Championship lightweight champion. 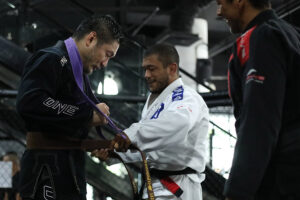 Tonon is not as experienced in MMA terms but did challenge for the ONE Championship featherweight belt last month. He will be moving up in weight for his return to submission grappling.

Aoki and Tonon faced each other in a submission grappling bout at ONE: ‘Dynasty of Heroes’ in 2017. The American won with a heel hook.