The main event of ONE: ‘Lights Out’ did not last long. The event’s name  proved to be prescient with Garry Tonon left unconscious less than a minute into his featherweight title fight with Thanh Le.

The fight was barely 30 seconds old when Tonon dived for a leg lock. He is one of most decorated submission specialists in the sport so it wasn’t exactly a surprising strategy.

The challenger briefly had the ankle locked but Le responded with pure aggression. He threw punches and hammer fists as Tonon tried to crank on the leg. 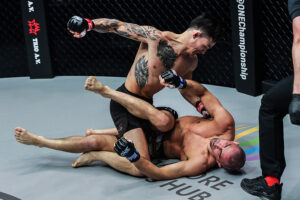 Not only did Le succeed in breaking Tonon’s grip, he did serious damage to the BJJ black belt. Tonon was lying on his back and two right hands from his opponent connected clean and drive his head hard into the canvass.

Tonon was clearly out and the referee dived in to save him from further punishment with the finish coming at the 0:56 mark. It was the firs loss of his career but Le remains undefeated in ONE Championship.

The champion improves to 13-2 and was awarded a $50,000 bonus for his efforts. Tonon drops to 6-1 after tasting defeat for the first time in his MMA career. 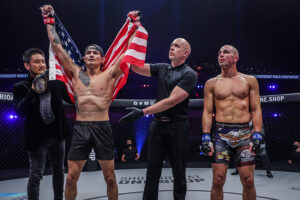 The co-main event also ended abruptly. Brazilian’s John Lineker and Bibiano Fernandes went to war with the latter ultimately prevailing by way of second round KO.

Fernandes dropped Lineker with a left hook in the opening round. But moments later he ended up on his back with the challenger landing ground and pound.

By the start of the second stanza Fernandes face was badly marked up but he elected to continue trading punches with the UFC veteran. It was Lineker who got the better of the exchanges with a left hook knocking the veteran out.

Lineker also received a $50,000 bonus for his efforts and wins the ONE Championship bantamweight belt. He moves up to 35-9 while Fernandes drops to 24-5.

Also walking away with a $50,000 USD bonus was Iman Barlow who stopped Daniela Lopes in the first round of their Muay Thai fight.