Garry Tonon was booked to face Dustin Poirier in a grappling match last year. The fight fell through but the ONE Championship title contender would be open to facing the UFC star in the future,

He told Sports Keeda that,

“I don’t know what it would take to make that happen again but I would love to do something like that. If a match like that came up, maybe I could consider doing it in between because it’s a little different. I wouldn’t be preparing for another grappler. If I’m competing against another guy whose main focus is MMA.” 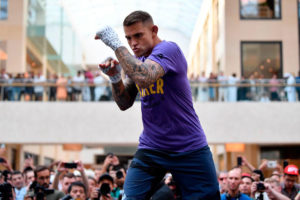 While there has been lots of talk about ONE Championship and the UFC potentially pitting their biggest stars against one another there is no chance of it actually happening unless the format is something other than MMA. Tonon likes the idea of competing against rivals from other promotions in submission grappling just because it opens the door to matchups which would not otherwise be possible,

“I always love the idea of those cross-promoted events because the chances of me fighting a guy like Dustin Poirier are pretty limited considering we’re in different organizations but the fact that we’re able to find a way to test each others skills in grappling because its a different sport or whatever is kind of cool.”

For the time being Tonon is busy preparing for a title fight with Thanh Le that is definitely happening, even if it doesn’t have a date at present. But in the future a grappling match with Poirier looks a distinct possibility if both men can find time in their busy fight schedules.