Geje Eustaquio has been on the ONE Championship roster since 2012. The 32 year old knows what it takes to win the flyweight title, he briefly held it himself but came up short in his first defence.

Eustaquio is coming off back to back wins and has won three out of four since losing his belt. He might not be ranked in the flyweight division but the Filipino is close to being a contender.

However Eustaquio says that his priority is to help teammate Danny Kingad win the title for the first time,

“The game plan for me is simple The game plan is to give Danny the opportunity to become a world champion,” he explained. 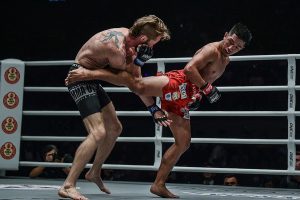 Currently ranked at #2 Kingad is clearly closer to a title shot than Eustaquio. He is eight years younger and has already challenged unsuccessfully for the belt on one occasion.

Eustaquio will never forget the moment he became a champion and he wants his friend and teammate to have this experience, Eustaquio is still ambitious though. He is waiting for his first fight of the year and will be looking to make it three ONE Championship wins in a row for the first time in his career.

If Eustaquio registers another victory or two and Kingad’s winning streak is halted the two flyweights could easily reverse roles. Should that happen it would be the older man who came into contention.

Intriguingly Eustaquio seems to think that the only thing standing in Kingad’s way is a potential loss of motivation. Should that happen the 32 year old would immediately take his title ambitions off the backburner,

“On my end, coach told me to keep doing my part and keep winning because if Danny will not do his work and maintain the right attitude toward becoming a world champion, then I will gladly take his slot and become a world champion once more.”