Danny Kingad has only ever lost to two men, Adriano Moraes and Demetrious Johnson. He wants to face the former who holds the flyweight title after knocking out the latter at ONE on TNT.

He hasn’t fought for over a year with bouts having fallen through due to positive Covid-19 tests. But Kingad still has his sights set on a rematch with the champion,

“If they give me a shot at Adriano Moraes once more, for sure I’ll take it. I want it,” he said.

He was 7-0 when he faced the Brazilian in a title bout back in 2017. But Kingad hadn’t faced any top tier opponents at that stage and believes he is a much better fighter now,

“Compared to the man who faced him back then, I’m a lot different. I’ve gained a lot of experience since that match, and I know that I’m ready for the world title shot.”

Kingad points out that it isn’t just him who has improved in the last five years. His team has enjoyed some genuine success with the likes of Eduard Folayang, Geje Eustaquio, Kevin Belingon and Joshua Pacio all winning ONE Championship titles.

“I feel like I’ve improved a lot from that fight. Aside from being younger in that first match (Team Lakay) has also improved in terms of how we prepare. Now we have a better gym, we have better equipment, we have better training partners unlike before, where we had to work with what we had. I’ll be more prepared.” 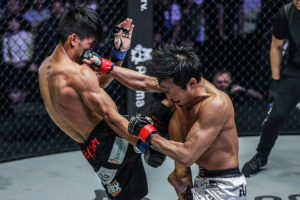 Kingad has seen two bouts with Kairat Akhmetov fall through in the past year and admits it is frustrating to have sat on the sidelines for so long,

“Looking back on my past fights, I still have a lot more to give. I still have to continue to improve on my ground game and my wrestling because that’s what professional athletes do,” Kingad says.

Kingad is 25 years old but is already a veteran of 13 ONE Championship fights. Having faced both Johnson and Moraes he can confidently say he has been in with the best in the division.

But Kingad believes he is continuously improving and after the longest break of his professional career he promises to be better than ever when he finally returns,

“People can expect a different Danny Kingad each match. When they see me compete next time, it’s going to be a lot different.”