This year was a memorable one for Gina Iniong. The ONE Championship atomweight became a parent for the first time, giving birth to a baby girl.

The 31 year old boasts a 9-5 record and has won her last two fights. Iniong confirmed that she plans to compete again in 2021,

“I’m hungry and motivated to re-establish myself at the top. Fans can expect a stronger, wiser and more dangerous Gina Iniong next year.” 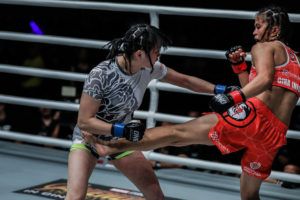 Given that she managed to get in a fight at ONE: ‘Fire & Fury’ as well as giving birth Iniong can look back on 2020 with pride. She says the time away from the cage taught her some valuable lessons,

“This year, everything just fell into place for me, and I learned a lot of valuable lessons. The biggest lesson I learned this year is that time is so precious. You can’t put a price on it. It’s the only thing you can never make more of. It’s life’s most expensive commodity.”

The Team Lakay representative says she has not resumed training yet but hope to do so as soon as possible,

“I can’t wait to get back in the circle. I’ve missed it. Once I’m cleared to go back to training, and when my body feels right, you can expect to see me again.” 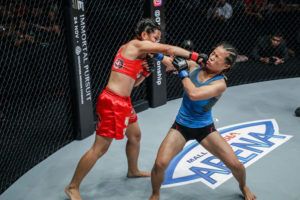 That would probably rule her out of the upcoming atomweight Grand Prix which is set to get underway in February. But Iniong is confident she can recapture the form which saw her earn a #5 spot in the division’s rankings,

“Everything is the same. I want to be the best Gina Iniong in the circle possible. Nothing has changed for me,” she said.

Current atomweight champion Angela Lee looks set to be on the sidelines for a while. She is pregnant too but Iniong says there is no shortage of talent in the division,

“My division is really exciting right now. There are so many great talents and I’m so excited for a lot of potential matchups. Any opponent that ONE Championship will give me, I’ll be ready.” 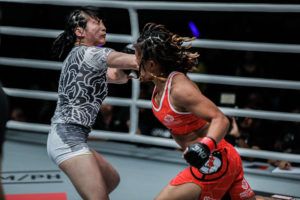 Towards the tail end of 2019 Iniong competed in the SEA Games in Manila. She claimed a gold medal but says this was not her proudest achievement of the past 12 months,

“I won gold at the SEA Games. I was able to represent my country and bring glory and honor back to the Philippines. Most important of all, I was able to get married and have my precious baby girl.”

Anyone glancing at Iniong’s MMA record might make the mistake of assuming it was an uneventful year for her. In fact she has achieved an incredible amount, both inside and outside the cage, and has high hopes for 2021.