Glenn Sparv has fought for a few promotions, trained at a number of gyms and been a consistent presence on the Asian MMA scene for the last five years. The Finnish welterweight has won titles in both Thailand and Australia and made himself a lot of friends along the way.

Sparv won three fights out of four in 2018 and knows what he wants the coming year to bring.

“End of the day I basically fight anyone if the whole package is right,” he said.

“I want old school ruleset, a big paycheck, a cool experience. I just wants something that get my boat rocking. I would appreciate if somebody called me out, got me a little bit triggered but nobody seems to wanna poke the sleeping bear. Unfortunately I don’t have any personal issues with anyone that I could possibly be matched up with. I wish I did so I could do some name calling.” 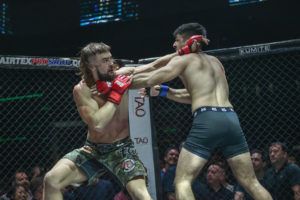 Former opponent Zebaztian Kadestam, who stopped Sparv in a PXC title fight in 2006, is the reigning ONE Championship welterweight king. Old adversaries like Alberto Mina and Nicolas Dalby have also gone on to sign with the UFC and this is a path the 30 year old would love to follow.

“Of course I’m gunning for that UFC but if that doesn’t happen, I won’t be shedding no tears. The prizefighting profession has taken me around the globe and back more than one time, it has stationed me in Asia for six years and counting. During these years I have seen better men quit, bigger men fall but I’m still here.”

So far Sparv has fought in Thailand, Taiwan, China, the Philippines and Singapore as well as Denmark, Sweden and Finland. He’s also had four bouts in Australia and has won them all. The man from Finland says it’s the lifestyle that he really loves.

“I’ve been a full time fighter for seven years now and I can’t imagine not doing it. The actual fight is not what keeps me in the business, the fight itself is just a reward and a punishment at the same time. It’s something that I’m required to participate in, it pays the bills, gives me a purpose and the privilege to call myself a prizefighter. Everything that goes on around the fight, the people you meet, the training, the experiences and the journeys, that’s the part that I love and that’s the part that keeps me in business.” 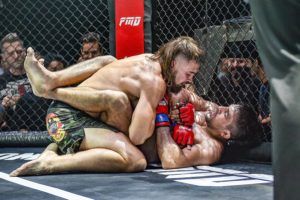 In 2004 Sparv defended his Cage welterweight title in Helsinki. His opponent was riding a three fight winning streak going into the bout and that night will remain etched into his memory.

“Most people think the hardest fights are the ones you lost, but losing is easy, it just means you didn’t do enough,” he said.

“My toughest fight was against Johan Vanttinen in Finland 2014, I defended my belt and it was a fight for the number one spot in Finland. It was hard because it was my first fight out of a new gym so there was pressure for being the new guy on the block. It was hard because I cracked my clavicle bone a month out. It was tough because I didn’t think I could beat this guy, but I still wanted to fight him. I didn’t win because I was a better ‘martial artist’. I won because I was a better fighter that night.”

There can’t be many welterweights who can say they have held titles with promotions in Finland, Australia and Thailand. Sparv would love the opportunity to fight in front of the bright lights of Las Vegas or New York but is content with the direction his career is currently taking.

The 30 year old fought five times in 2018 and saw another signed matchup fizzle out. He doesn’t know what the new year will bring, but Sparv plans to be extremely active and wants promoters to know he’s very much on the market,