Two more fights were added to the Shooto 0131 card today. In the middleweight division submission specialist Sotaro Yamada has been matched with ONE Warrior Series veteran Gunther Kalunda.

Ngunza (6-2) has seen action at Road to ONE 3, OWS 5 and OWS 6 in recent years. The former EFC welterweight champion is based permanently in Japan.

Yamada (12-6-2) is the former Zst welterweight champion. He is a regular competitor on Quintet but has not competed in MMA since 2017.

The other bout is in the welterweight division. It pits Yoshitomo Inoue (1-1-1) against Taira Uehara (3-1), the latter is coming off the first loss of his career at a Zst event in 2020.

As previously announced Shooto 0131  is set for New Pier Hall in Tokyo. Among them is a fight between Taison Naito and Keisuke Sasu which will have the Shooto Pacific Rim featherweight title on the line.

Also on the card are featherweight bouts pitting Hayato Ishii with Yoshizumi Kobayashi and Tsubasa Saito against Takumi Arai. Meanwhile Yusuke Kamata takes on Yuto Sekiguchi in a bantamweight bout. 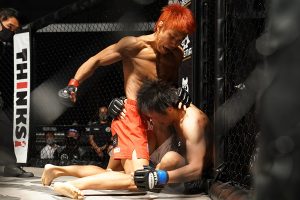