Soo Chul Kim’s comeback ended in defeat at Road FC 59 tonight. He was submitted by Hae Jin Park with ten seconds of the first round remaining.

Despite a four-year absence from competition Kim started with plenty of his trademark aggression. He maintained a close distance and attacked the far legs.

Park stood his ground and fired back with big punches, mostly just grazing the target areas. Park tried to pull guard twice to no avail. They locked up in the clinch immediately after and traded punches and knees for a long stretch of the round. After a brief cat and mouse game on the canvas with Park trying to lure Kim into a grappling exchange, the ref restarted the action in the center. When Kim looked to be frustrated, Park stood toe-to-toe and thrived in the dirty boxing battle.

While Kim tried to lunge in with a few punches, Park slid to the side and crushed the jaw with a left hook that staggered his foe. Kim was in survival mode and dove for the legs. 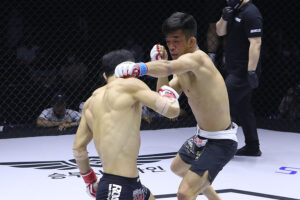 Park tied up the neck and pulled guard. Despite using the cage to flip over and escape, Kim could not get his opponent off his neck and was eventually forced to tap with seconds remaining in the round.

With everything stacked against him, Park pulled off the huge upset and captured the featherweight title. He redeems himself for coming up short the last time he challenged for this belt.

The newly crowned featherweight champion moves to 9-1. On the flip side, Kim loses for the first time since 2013 and drops to 16-6-1. After Seo Hee Ham took her talents to ONE Championship, the organization pitted Eun Jeong Park against Yu Ri Shim for the vacant atomweight belt. In the co-main event Shim some adversity in the buildup the hospitalization of her father and a broken nose early in training camp to capture the atomweight title.

Shim instantly put the pressure on Park while managing her distance and landing strikes. She got the better of the early exchanges only for her opponent to fire back with a solid left hook and calf kicks.

Midway through the opening round, Park dipped under and completed a takedown. Once on the ground, she slid into the mount and took the back. Although the neck was wrapped up and Shim was turning purple she did not secure the legs and her opponent escaped. Park blasted a pair of right hands to sting Shim to kick off the middle round.

Shim was not deterred and continued to march forward with the jab as the lead weapon. Once again, Park changed levels and dumped Shim on her back.

They moved to the fence and Shim scrambled out to get back to her feet. She was applying pressure and her boxing combinations were hitting park from all angles. Shim mixed in the kicks well to end the round with momentum. She continued to score in the the final round, connecting with two right hands as well as a left hook.

Her opponent kept missing with her strikes and was visibly slowing down while Shim worked her defensive wrestling with success. Multiple takedown attempts were thwarted and Park looked lost on the feet.

Shim (6-3) was awarded a unanimous decision and takes home the title. Park (7-7-1) saw her four fight winning streak snapped by this defeat. The rest of the night was filled with first-round finishes.