Ham Seo-Hee retained her atomweight title with an impressive performance against a gutsy opponent in Park Jeong-Eun in the main event of Road FC 51.

After almost a year on the sidelines, the South Korean legend returned to the cage to defend her strap and didn’t show any signs of slowing down. Although Ham seemed to be going into the fight with a little animosity from some of the comments made by Park in the lead-up, she displayed a true veteran’s spirit throughout all three rounds.

Ham marched forward immediately and took the centre in the opening frame. She spent most of the first five minutes chasing around Park and landed that signature left hand sporadically. However, Park had her moments.

The title-challenger connected a few counters with the right hand and a headkick when Ham seemed to have had a lapse in concentration. Towards the end of the round, they clinched up and Ham got the trip. Park worked back up yet ate punches for her troubles. 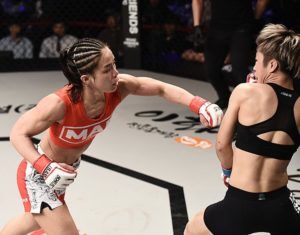 When the second round started, Park came out with a sense of urgency and became more active with her lateral movement. As Park was landing with the straight right, she looked to be gaining confidence with her game plan.

This all changed, however, after Ham threw a flurry and clinched up. Park tried for a throw but fell onto her back with Ham on top. Ham commenced to pounding her fist onto her adversary until the bell rang to end the round.

The action really picked up in the final round.

With a damaged right eye, Park did not sway away from exchanges. She blasted for a takedown attempt early but Ham sprawled and scrambled. Park continued and pressed Ham against the fence. 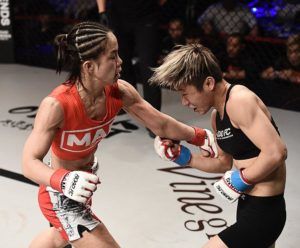 After Ham wall walked back up to her feet, Park tried for a suplex and failed miserably. Ham landed on top and they struggled for a favorable position.

During a scramble, Park hooked the leg and rolled over to attempt a hail mary kneebar. Ham calmly stayed out of danger and slammed down punches to the body and head repeatedly. The damage added up and Park abandoned the submission and went back to closed guard allowing the ref to see the slow down in action and stood them up.

Since leaving the UFC at the end of 2016, Ham Seo-Hee (20-8) has been nothing short of incredible winning three straight with two finishes over world ranking competition under the Road FC banner. Her opponent drops to 4-5-1.

Unfortunately, the atomweight queen runs into the problem of not having a formidable foe to face that is under contract by the organization. Looking outside of South Korea again will likely be the proper move.

One potential candidate for a shot at the champion could be Shim Yu-Ri (5-2). She stopped Shi Ming (2-3) in the second round. In the other atomweight fight debutant Lee Su-Yeon (1-0) beat Lee Ye-Ji (3-5) by split decision