Hiroki Ito extended his winning streak to three with a split decision win against Toru Hara at Deep 109. This was the 25 year-old’s first main event and he apologized afterwards for his performance despite getting the nod from four of the five judges.

The Aichi-native came into the bout on the back of a knockout victory against Yuichi Miyagi at Rizin 36 and this was certainly a winnable fight on paper with Hara boasting a mere 2-3 record including losses in his last three outings.

In the first round it was Ito who got the better of the striking – finding joy with a combination of low kicks and body kicks, jabs and one-two combinations. Hara responded with a takedown. Ito soon found his feet and went for a kimura but Hara was able evade and got the sweep before taking side control.

Ito landed with an overhand left and a low kick in the second round. Hara replied with the jab. Ito caught Hara on the back with a left high kick who soon shot for a double leg.

Hara wobbled his opponent with a jab in the final round and Ito almost gave up his back in a scramble. He soon secured a takedown and dished out some ground and pound towards the end of the round to put the result beyond doubt. His record climbs to 12-3. Hara slips to 2-4.

In the co-main event Pancrase stalwart Toru Ogawa saw his Deep debut spoiled by Tomohiro Ataniya who secured the tap with a kimura in the first round to extend his record to 17-16-3. This was a second straight loss for Ogawa following his defeat to Satoru Enomoto at Pancrase 326.

Elsewhere there was a return to action for grappling icon Masakazu Imanari who lost a unanimous decision against Takahiro Ashida. The 46-year-old ‘Ashikan Judan’ is a former Deep bantamweight and featherweight champion.

The 36 year old is coming off a win over Takeshi Kasugai at Rizin Landmark 1 but came up short here as Ashida extended his record to 25-12-2. Imanari drops to 39-21-2. 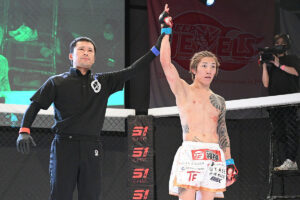