After completing his climb to the apex of Pancrase’s talent-filled welterweight division, Hiroyuki Tetsuka expects a much bigger reward than the right to call himself the welterweight King of Pancrase.

Tetsuka is coming off a title-clinching performance, defeating arch-nemesis Kenta Takagi by way of first-round submission to capture the interim welterweight championship in a rematch at Pancrase 306 last month.

The 29-year-old native of Tochigi, Japan believes that his most recent victory is enough to get a career-changing call from a major promotion,

“I am super satisfied with my performance against Kenta Takagi. It made me feel that I am ready to move up to a much bigger stage of the sport. I love the challenge and the excitement that MMA gives me. I am ready to take on new challenges in my career,” he said. 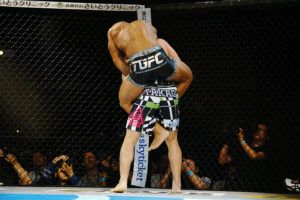 A possible destination could be ONE Championship as the Singapore-based organization struck an exclusive deal with Pancrase earlier this year, meaning champions from the Japanese promotion are automatically offered a contract,

“I have my sights on the bigger leagues of the sport. If I get an offer from ONE Championship, I would like to go there and test my skills. They have many talented fighters over there and I am more than willing to be part of their organization,” he stated.

ONE: ‘Century’ is set for Tokyo on October 13th. Tetsuka has set his sights on a spot on the card, which will feature four Shooto vs. Pancrase matches with $50,000 USD on the line for each winner,

“I heard they are having an event in October. I am ready, and I am free on that date,” he said. Tetsuka would also be open to fighting for major U.S. promotion like the UFC, Bellator and PFL. He’s just hoping that winning the Pancrase belt will make the phone ring,

While he waits for his phone to ring, Tetsuka remains focused on his role as the interim Pancrase welterweight champion. A title unification contest against reigning welterweight kingpin Glaico França could be in the pipeline for Tetsuka if the Brazilian stalwart decides to return to Japan after his stint in PFL. But he is willing to face anyone on Pancrase’s 170lbs roster in order to prove his worth as a champion,

“I am willing to fight anyone and defend this belt. I am ready. That’s all.”