Honorio Banario was the first ever ONE Championship featherweight champion. Since signing for the promotion in 2012 he’s experienced it all, from five fight winning streaks to five fight losing streaks.

He’s faced champions past, present and future. But coming up at ONE: ‘Century’ on October 13th is arguably the biggest fight of the Filipino’s career.

He takes on multiple time lightweight champion Shinya Aoki in Tokyo and Banario is happy just to be involved in this historic event,

“He was already a champion even before I started training in martial arts. Going up against him is already an achievement for me and I want to show that my skills are right up there with a legend like Aoki and (that I can) be considered as a world class talent. At ONE: ‘A New Era’ earlier this year Aoki submitted Banario’s training partner Eduard Folayang in the opening round. The Team Lakay standout is determined to avoid suffering a similar fate,

“Against a legend like Shinya, I need to be flawless in executing our game plan because he’s known to finish his matches quickly. We need to let him play our game instead of us playing into his,” he said.

Aoki’s strengths and weaknesses are not exactly a secret. He can be vulnerable in striking exchanges but is one of the most accomplished submission specialists in the entire sport.

Banario believe it will be vital to keep this fight standing and avoid grappling with the two time champion if possible,

“We know that there’s very little margin for error against Shinya, and just the slightest mistake will allow him to take you down to the ground where he is at his best.” 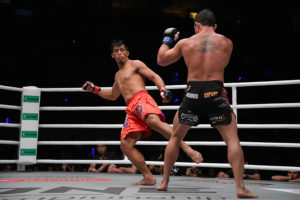 In Folayang he has a teammate and training partner who knows exactly what it takes to beat Aoki. Banario says the two lightweights have been working very closely together to prepare for this contest,

“He’s been helping me quite a lot in preparing for the match. He’s helping me train and pointing out Shinya’s strengths and what I could do to combat his game plan. He helps me simulate what I could do in the match and train it repeatedly so that it becomes almost like muscle memory for me.”

It promises to be the quintessential clash of styles. Both men know what their opponent will try to do, the challenge will be for each to find a way to execute their own game plan.

“Hopefully, I can execute the game plan properly and get a finish. if I am able to exploit his game, I will shock a lot of people.”