Eduard Folayang says winning is everything

Filipino superstar Eduard Folayang would not have been short of motivation heading into his highly-anticipated showdown against Eddie Alvarez but he was given added incentive by a recent announcement. Timofey Nastyukhin suffered a serious knee injury and had to withdraw from the tournament.

As a result Folayang’s ONE: ‘Dawn of Heroes’ bout with the former Bellator and UFC lightweight champion was elevated to the status of Lightweight Grand Prix semi final.  A bout with Saygid Arslanaliev in Tokyo later this year awaits the winner.

Both have landed in the semi-finals of the ONE Lightweight Grand Prix after Nastyukhin, who was scheduled to face Folayang’s teammate Honorio Banario, had to withdraw from the tournament due to a serious knee injury.

The two-time ONE Championship lightweight titleholder is delighted to be part of the tournament,

“This is an added motivation for me because my path is clear now in every fight. I definitely need to win this,” Folayang said.

“I wasn’t supposed to be here, in the first place. That’s why I am happy because of the opportunity. Now, it’s all about making the most of it.” However the extra reward on offer does not affect the task at hand. Folayang needs to beat Alvarez and that will be no easy task,

“As I’ve said, the most important thing is winning this match. If you fail to take the first step, then it will be all for naught,” he said.

Folayang will enter his bout with Alvarez at a crossroad as he is coming off a tough defeat that cost him the belt. He was swiftly submitted by Shinya Aoki in a rematch at ONE: ‘Century’.

A victory over the American hard-hitter would leave him one win away from another shot at the belt. A second- straight defeat would leave that elusive title even further out of reach.

Seeing this opportunity as his first step back to world title contention Folayang has left no stone unturned in terms of his preparation,

“The mindset is to get in there, win and beat a big name like Eddie Alvarez. That’s the aim, that’s the goal. Also, I want to get my belt back. I am preparing really hard for this fight,” he said.

Like Folayang, Alvarez seeks to place himself back on the winning track. In his ONE Championship debut nearly five months ago, the 35 year old succumbed to a first-round technical knockout loss at the hands of Nastyukhin.

Alvarez is aiming to become the first man to win titles with Bellator, the UFC and ONE Championship. Folayang has been following his opponent’s career for a while and knows exactly what it feels like to be stopped by Nastyukhin,

“It’s tough to compare the past from the present. He lost, so it’s natural that he really wants to bounce back. I went through that as well, and of course, I wanted to bounce back as quick as possible.”

Folayang sees this as a very important fight. Alvarez has a stellar reputation in the sport of MMA and the Filipino wants to test himself against a legendary opponent, 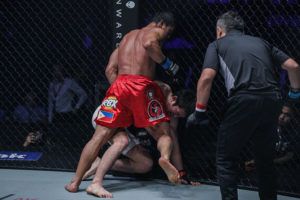 Folayang realized that he is going up against the most decorated opponent he has ever faced to date. With intense pressure to put on a performance in front of the Filipino fans this is one fight he does not want to lose,

“The home crowd will certainly be a factor, especially since I’m facing a very good opponent. I think all of the fans know that. They know what’s at stake and that’s why we should be at our best. Sometimes all they care for is winning or losing, so we really have to be better,” he stated.

Never the type to predict how his match would end, Folayang settled in promising fireworks at the Mall of Asia Arena,

“This will be an explosive fight. What I can promise is that this will be a great fight because we’ve worked hard for it during training sessions. For sure, I want to deliver the performance of a lifetime”