A whole generation of MMA fans wouldn’t even have been born when Ikuhisa Minowa first stepped into the ring. A veteran of Pancrase, UFC, Deep, Pride, K-1, Dream and Road FC, the Japanese legend began competing in 1996.

He will return to action after an 18 month absence this week. The 44 year old is set to make his promotional debut at Rizin 26 and says he is in top shape despite the lengthy layoff,

“I took this time off to heal my old injuries and I have never felt so injury free. I was working on maintaining my physical condition along with building endurance. I have been in great shape, and my condition is very good.” 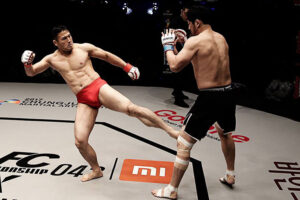 New Year’s Eve shows have always been a big deal in Japan, and ‘Minowaman’ is no stranger to a calendar-ending showpiece having been part of some stacked December 31st cards, notably winning the Dream super hulk tournament at Dynamite 2009.

Now, as he prepares to make his long-awaited bow for Rizin, he is relishing the chance to compete in front of a big domestic audience again,

“I am very happy and grateful for this opportunity. I think it’s a platform for me to unite with the fans and my opponent, to create an atmosphere that will give hope and provide dreams to everybody so they can head into the new year with a positive attitude.” Having competed against much larger fighters for the majority of his career Minowaman’s nickname is ‘The Giant Killer.’ This week he will be taking on Tsuyoshi Sudario, a 23-year-old heavyweight, who made his name in the world of sumo wrestling.

Minowa is nearly twice his opponent’s age and much more experienced in MMA terms. He will be significantly smaller but believes Sudario is the sort of opponent who will make for an entertaining match,

“It won’t matter if my opponent has only one fight or has had 100. This fight will be an exciting fight from the moment the bell rings.”

As the bout draws closer, Minowaman’s excitement is palpable and he admitted,

“I’m enjoying every moment ever since the fight has been confirmed.” The veteran is clearly someone who enjoys what they do immensely, and he takes great pride in what he’s been able to achieve throughout his storied contribution to the sport,

Given his age, Minowaman will invariably continue to face questions about how long he intends to compete.

“I too, want to know how far I can go. I’m not sure when the end will come, but I want people to know that anybody can become a ‘chojin’ (super human).”