ARC 4 kicked off the year with an entertaining spectacle. On Saturday night in Seoul, rising heavyweight prospect Il Hak Oh battled through some adversity and ended the main event early with a submission win over Jung Kyo Park.

After landing a sharp leg kick, Oh was able to drag his adversary to the ground with a slick trip. Some solid ground and pound was not enough to keep Park on the floor.

The 42-year-old brawler played the peek-a-boo game, looking to lure his opponent in by covering up. When Oh fell into the trap he attacked which proved an effective strategy in the early exchanges. At the start of the second frame, Park’s left eye had completely swollen shut. Even though he tried to protect it with a high guard, it just became a target over and over again.

In the middle of the third round, after some furious exchanges, Oh wrapped up the neck and pressed Park against the fence. He swiftly locked in the standing guillotine and it was so tight the tap came almost instantly.

Oh earns back-to-back stoppages over gritty veterans and elevates to 4-0. Park, on the other hand, is finished for the third straight time and slips to 7-11. 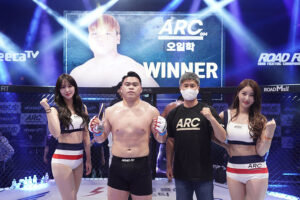 Despite the recent death of his mother Nandin Erdene pushed through training camp and competed without hesitation. But it was to no avail as Seung Mo Park scored a knockout after just 28 seconds.

Nandin Erdene struck first with a clean right behind the ear that had his opponent backpedalling quickly. In a wild flurry with his back against the cage, Park countered back with a left hook that had a staggering effect.

While Park rushed forward, Nandin Erdene slipped in a quick left moving backward that dropped the South Korean to his knees. Park popped right back up to immediately clip his foe to slow the pace.

Again, Nandin Erdene was hit with the left hand and fell down. He swarmed and put the lights out with another left, leaving ‘Oka’ face-first into the canvas.

With the upset victory and the bonus check, the Team Finish product collects his first finish and moves his record to 2-0. Meanwhile, Nandin Erdene snaps his five-fight win streak and drops to 13-7.

Jung Hyun Lee (3-0) extended his unbeaten streak with another highlight-reel finish. The flyweight up-and-comer collapsed Jin Woo Park (0-1) with a solid left hook in the second round.