In Su Hwang is the new middleweight champion after pummeling Il Hak Oh in the main event of Road FC 58. After a 19-month hiatus the Korean promotion returned to action on Saturday night in Changwon.

With Hae Jun Yang relinquishing the middleweight crown earlier this year, the promotion pitted Hwang against Oh to battle it out for the vacant belt. Both individuals darted out the gate but it was the former, wearing a rash guard to cover his tattoos, who applied the most pressure while landing heavy legs kicks.

They engaged in a few light exchanges and then Oh tried to initiate the grappling to no avail. Hwang was able to shake him off and separate. 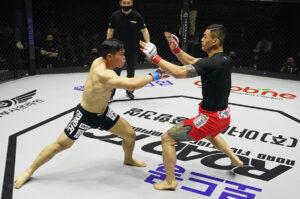 Oh connected with an overhand right that had Hwang retreating to the other side of the cage but he got his bearings and invested in calf kicks once again. But his opponent started digging multiple damaging shots which would lead to the demise of the previously undefeated featherweight.

Hwang found himself entering the second round for the first time in his career. He looked at home in this unfamiliar territory, cracking a solid kick to the calf that immediately debilitated Oh.

While on the retreat Oh was dropped with a straight right. The Team Stun Gun representative finished him off with another punch for good measure on the ground.

The middleweight strap is wrapped around the waist of Hwang (6-1) who scores the sixth knockout of his career in his hometown. Oh (4-1), on the other hand, loses for the first time. 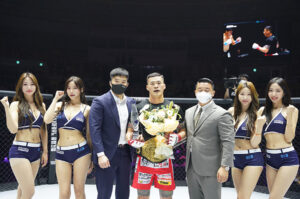 In the co-headliner actor-turned-fighter Gwang San Geum facing reformed Yakuza Jae Hun Kim. The latter combatant entered the bout with a 45kgs weight advantage and utilized every single ounce to pick up the victory.

They both attacked the legs at the start. Once the feeling out process was over, it was Kim who pushed forward and landed some punches.

Following a battle in the clinch, Geum was tossed along the fence and battered with a myriad of hammerfists. With no movement being made, the referee jumped in and stopped the contest.

Kim (1-4) collapsed to the floor in tears as he picked up his first professional win at the fifth attempts. The 45-year-old Geum (0-1) loses on his MMA debut. Hae Jin Park returned after getting knocked out almost two years ago at Road FC 55 while challenging for the featherweight title. He took on Doo Seok Oh and marched forward from the onset with his hands high.

Park eventually succeeded in and eventually clinched up with his foe. The jiu-jitsu specialist dragged Oh to the mat and rolled into a kneebar instantly.

After a few minor adjustments, Oh had nowhere to go and tapped to the submission. Park gets back into the win column and elevates to 8-1 while his opponent drops to 3-6.

To kick off the main card, highly-touted lightweight prospect Si Won Park (6-0) took out Tae Sung Kim (4-1) in the first round and continued his rise up the ranks with another win.

After they traded kicks for the first few exchanges, Kim stepped forward with a combination and Park slid to the side to unload a counter left hand that faceplanted his opponent to the canvas. The Team Stun Gun product keeps his undefeated record intact with the fourth finish of his young career while his opponent tastes defeat for the first time.