One fight has been dropped from Sunday’s ONE: ‘A New Era’ card. An injury to Ivanildo Delfino has forced his quarter final matchup with Tatsumitsu Wada to be postponed.

The winner of the postponed bout is scheduled to meet either Demetrious Johnson or Yuya Wakamatsu in the semi final meaning the match between Wada and Delfino will need to be rescheduled as soon as possible.

Andy Souwer has also withdrawn from the featherweight kickboxing Grand Prix. His bout with Yodsaenklai Fairtex will go ahead but at a catchweight of 72kgs,

ONE: ‘A New Era’ features former UFC champions Demetrious Johnson and Eddie Alvarez as well as four title fights and is being hailed as the biggest card in the promotion’s history.

In the main event Eduard Folayang defends his lightweight title against Shinya Aoki while Angela Lee challenges Xiong Jing Nan for the strawweight title in the co-headliner.

Meanwhile Aung La Nsang defends his belt against Ken Hasegawa in a middleweight title rematch while Kevin Belingon puts his bantamweight strap on the line against Bibiano Fernandes in a trilogy title bout.

Garry Tonon, Shinya Aoki to compete on May 20th 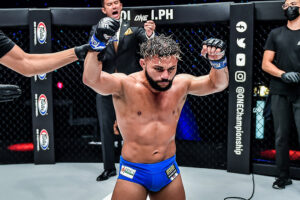