American heavyweight Jake Heun is not a happy man. The 32 year old was riding the crest of a wave when the Covid-19 pandemic struck, but has been totally unable to compete in 2020.

It promised to be a career defining year for Heun. He fought five times in total last year and is riding a three fight winning streak that established him as arguably Rizin’s #1 heavyweight.

Heun was expecting to compete on a Rizin card in April when disaster struck,

“The level of disappointment 2020 has brought has been biblical. I was riding on such a good wave and was gearing up to fight in April right before the first set of lockdowns,” he told AsianMMA.com. The good news for Heun is that Rizin is up and running again with two cards booked for next month. The bad news is that fighters from outside of Japan are unable to enter the country at present.

He is based in Australia and is just hoping that the travel restrictions will be eased,

“I had big plans for this year to win the Rizin belt and challenge Bader maybe in Bellator. Unfortunately that’s not the way things shook out this year but I’m hoping to be back in Japan this fall, just as long as I can get there.”

Fighters like Mounir Lazzez and Felicio Andrade have found themselves in the right place at the right time. The former is based in the UAE and was recently signed by the UFC while the latter is a long term resident in Phuket and was snapped up by ONE Championship earlier this month. “Life in Melbourne right now is pretty hairy. We’re back on stage three lockdown, and the Covid case number is shooting up pretty quick. It’s nothing like the States, but it is enough that in Victoria there is talk of stage four lockdown, similar to what New Zealand, Spain and Italy did. Not ideal scenario for anyone.”

If the cases continue to increase then Heun says he won’t even be able to train,

“I’ve been able to train (because) under the current stage three scenario professional athletes can train, but if stage four comes into play it could go away. I’ve been lucky having something to take my mind off this thing and being able to stay ready for a fight.” Before the Covid-19 crisis struck Heun was very happy in Australia. It provided the perfect base for him to prepare for his frequent fights in Japan,

“I train at Absolute MMA in Melbourne. It’s a great gym and has really been great for my career. There are great coaches and extremely high level ground players here, and the gym has gone out on a limb and got me my visa and given me loads of help out here. I am extremely grateful to them.”

But with fight cards back on the calendar in Asia being based in Australia is no longer ideal,

“There are zero fights occurring in Australia currently, I know some of the boys at Absolute were being booked for September but I’m not sure that that is still going to happen. The rest of Australia (outside of Victoria) is open but it’s not looking likely to stay that way.” Heun does have a plan, although its success will be contingent on factors well outside the American’s control. As soon as the borders between the two countries open he wants to move to Japan,

“My plan for the future is to move to Japan full time. The way everything has gone in my life recently it’s the play to make,” he said.

Heun has competed for a long list of promoters and events. He has featured on two separate series of The Ultimate Fighter and fought for Pro Elite, WSOF, PFL and Road FC.

But at Rizin he has really found a home and Heun wants to spend the rest of his career living and fighting in Japan,

“I’m taking Japanese lessons. I want to be there, fight often and ride out my career there.” 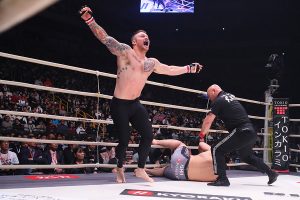 The only opponent to have beaten him during his Rizin run is Jiří Procházka. The former light heavyweight champion made waves with a big win at UFC 251 last week and Heun is not surprised to see his former foe enjoying success with a new promotion,

“Jiri’s fight in the UFC went about as I expected. He is a true talent and I think he’s going to make waves in that organization. I think once he worked out those early jitters he showed how talented he really is. I expect him to challenge for the title.”

Having twice tried and failed to earn a UFC contract by competing on The Ultimate Fighter you might think Heun harboured ambitions to follow in Procházka’s footsteps by competing in the octagon. But it is the furthest thing from his mind and the 32 year old’s focus is firmly on Rizin,

“I have no plans to make the switch to the UFC. I am very happy in Rizin and really want to end my career there. I want to move to Japan, become the champ and soccer kick everyone they send my way. And the beautiful thing about that is that means co promotion with Bellator, so there are some very interesting fights there as well. Jiri can have the UFC, I’ll take the world.”