Two fighters who have trained extensively in Asia and another who made his name fighting in Asia tasted victory at UFC 251 in Abu Dhabi. The event took place in a purpose built arena on Yas Island this morning without a live audience in attendance.

Petr Yan produced a landmark performance against Jose Aldo to clinch the UFC bantamweight title. The Russian finished Aldo via TKO in the fifth round, becoming the third fighter from Tiger Muay Thai to win UFC gold.

Yan came into the fight on the back of a perfect 6-0 record in the UFC. Here, the Russian showed off his exceptional striking against a legend of the sport renowned for his elite stand-up.

Yan started strongly, unleashing fierce combinations and showing exactly why he was touted as a potential champion from the day he arrived in the UFC. The 27-year-old landed a huge body shot to a grounded Aldo towards the end of the first round and there was a sense that an end could be in sight. 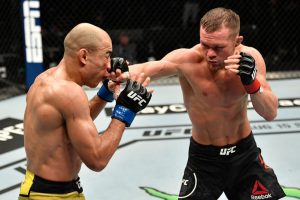 Aldo though, came back in the second round and ripped some savage shots to the body. Ultimately it would prove a false dawn for the veteran as Yan took control of the fight and wore his opponent down with supreme technical striking in rounds three and four.

The finish came in brutal fashion in the fifth. With Aldo on his back, Yan rained down a barrage of strikes and referee Leon Roberts could be accused of letting the beating go on too long.

Aldo was not defending, and after what seemed like an eternity of blood-strewn punishment, the fight was called and Yan was crowned the new UFC bantamweight champion.

He improves to 15-1 and remains undefeated inside the octagon. Aldo drops to 28-7 and the former featherweight champion has now lost his last three. 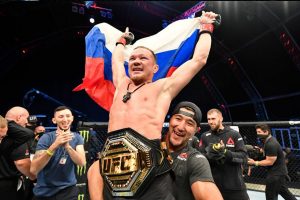 There was more delight to follow for the Tiger Muay Thai contingent following the Yan victory as Alexander Volkanovski defended his featherweight title in the rematch with Max Holloway.

Volkanovski, who was a winner in the Tiger Muay Thai tryouts in 2014, made history when he outclassed Holloway back in December to take the strap.

The Hawaiian was a different proposition this time and looked the sharper fighter in the opening stanzas but Volkanovski showed tremendous grit to swing the contest with some crucial takedowns in the championship rounds.

It was an engaging battle full of slick exchanges and the result looked far from certain when the judges’ decision arrived. In the end two of the three judges awarded Volkanovski the fight by a margin of 49-48 with the third turning in the same card in Holloway’s favour.

With the win Volkanovski improves to 22-1. Meanwhile Holloway drops to 21-6 although this fight was far closer than the first match between the two which the Australian also won by decision. 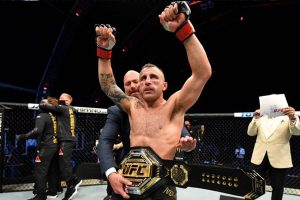 Elsewhere, it was also a night to remember for former Rizin champion Jiri Prochazka (27-3) as he produced a highlight KO on his UFC debut.

The Czech was making his bow against the formidable, #7 light heavyweight Volkan Oezdemir (17-5) and finished the Swiss power-puncher with an emphatic, right-hand, walk-off KO in the second round.

Prochazka came into this one riding an impressive ten fight winning streak with nine finishes and continued his fine form here as fans were treated to an absolute slugfest.

To win in that fashion against a former title contender is quite a statement and it will be fascinating to see who he gets paired with next.