Jarred Brooks will challenge Joshua Pacio for the strawweight title. The American made quick work of #1 ranked Bokang Masunyane at ONE 145 which took place at the Singapore Indoor Stadium tonight.

Brooks has had a lot to say for himself since signing for ONE Championship and whether tweeting, rapping or getting on the microphone after winning a fight he has made a concerted effort to get under Pacio’s skin. Tonight was no exception with the UFC veteran submitting Masunyane and then announcing,

But in order to have the opportunity to talk a bit of trash on the camera he first needed to beat Masunyane, something which had never been done before. But Brooks made it look easy, taking the South African’s back after a brief clinch at the start of the fight.

He didn’t even need a takedown to secure a body triangle with Masunyane standing and Brooks acting as a human backpack. It was a position ‘Little Giant’ had clearly prepared for and he looked relaxed despite being forced to defend against submission attempts so early in the fight.

When Brooks realized Masunyane was not going to give up the submission easily he started to focus on throwing punches to the body and head. They were in the position for nearly four minutes and it seemed that the South African would see out the round.

But Brooks only needed one opportunity and with seconds remaining he got it, slipping his forearm under Masunyane’s chin to lock in the rear naked choke. Seconds later he was unconscious and Brooks was celebrating his third straight ONE Championship win.

With the win Brooks improves to 19-2-0-1 while his opponent drops to 8-1 after suffering defeat for the very first time. Next up for the American will be a title fight with reigning strawweight champion Joshua Pacio. 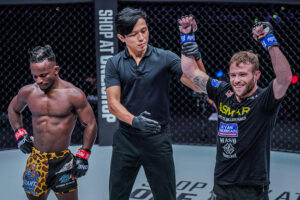 In the co-main event Liam Harrison and Muangthai PKSaenchaigym put on the greatest fight in ONE Championship history. The Thai fighter was returning to action after a prolonged absence but wasted no time in dropping his opponent with a head kick.

The Englishman barely beat the count and the fight appeared to be over when Muangthai scored a second knockdown. But Harrison somehow found his second win and set about attacking the former Lumpinee champion with punches.

Muangthai is not accustomed to wearing the smaller gloves and could not hide behind a high guard. In fact there was no hiding place as Harrison’s punches found their mark with unerring accuracy.

From the brink of defeat Harrison somehow secured a stunning comeback, knocking Muangthai down three times to win the fight. Afterwards he was awarded $100,000 USD in performance bonuses and handed a shot at bantamweight Muay Thai champion Nong-O Gaiyanghadao.