Jaures Dea snapped a two-fight losing streak with a unanimous decision victory against Sindile Mandengela at UAE Warriors 25. The featherweight fight headlined the card at the Etihad Arena

Dea dropped a split decision to Jalal Al Daaja at UAE Warriors 18 but got back in the win column with a convincing display here. The Cameroonian sought to take the initiative and went for an early take down.

Mandengela resisted and was able to keep his opponent pressured up against the side of the cage in a body lock for the majority of the round. The referee pulled the fighters back to the centre due to a lack of action in what was a fairly uneventful first stanza. 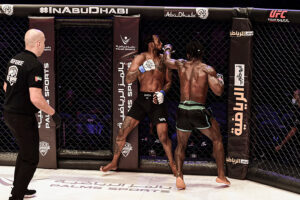 Dea cracked the South African with a heavy leg kick to the thigh in the second round. He then taunted him before following up with a slick sequence as he unleashed a left and right hook followed by a knee on the break. He then scored the first takedown of the contest before looking for a neck crank.

Mandengela was able to get the fight standing again but ate a big left elbow before getting caught with the left hook. â€˜The Ghostâ€™ secured a takedown with just under a minute left to go in the round but was unable to capitalize.

Dea showed good hand speed and landed a swift left right combo following a solid calf kick in the final round. He then uncorked another big low kick and responded with a dance move which warmed the crowd. Knee to the face

The Cameroonian then used his rear left leg to attack the lead leg of Mandengela who responded with a heavy kick to the body. Dea landed with a big left and right hand before unleashing another heavy combination that ended with a knee to the face.

Behind on the exchanges, Manengela went in for the takedown, but Dea sprawled well and locked in the guillotine attempt. Overall, the fan-favourite did more than enough to convince the judges as he extends his record to 8-4. Manengela falls to 8-7.