The bantamweight rankings have always featured Team Lakay fighters. Jeremy Pacatiw is looking to become the latest to crack the top five.

He is facing #4 ranked Fabricio Andrade at ONE: ‘Full Circle’ on Friday. The Filipino knows just how big an opportunity this is,

“This fight is huge for me. It’s big because in my second fight, I get to face a ranked opponent in Andrade. It’s going to be an exciting fight, for sure. I know a win here would give me a chance to crack the rankings and join the elite of the division. That’s why I have to give my best to get the win.” 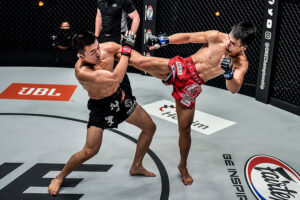 Andrade has taken the bantamweight division by storm and Pacatiw has been paying attention. He gives a detailed breakdown of the Brazilian’s style and approach,

“Looking at his previous fights, particularly against Shoko Sato, we’ve seen that he’s a very well-rounded fighter. He has very solid striking, and he has a great ground game. But that doesn’t mean that he doesn’t have any weaknesses. Looking at his striking base, he doesn’t use his movement a lot. He’s also not a volume puncher. He picks his punches, but it’s pretty accurate, so it’s something that I still have to be wary of.”

At ONE: ‘Battleground’ he put on a very impressive performance against Chen Rui. Pacatiw was victorious on his professional debut and is hoping for more of the same from his sophomore outing,

“In a sense, we’re pretty much keeping our game plan from the first fight: utilize my footwork and keep moving. If I stay put, plant my feet, and trade punches with him, that could put me in a very tough spot against him because that’s his game. So I have to use my speed and footwork, keep him guessing, and take him off his rhythm. That’s one of my weapons, my footwork.” 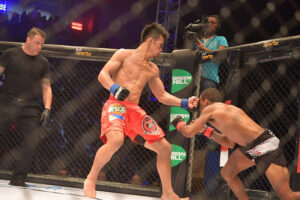 A win is a win

Pacatiw knows just how significant a win over Andrade would be for his career and future title prospects. Having gone the distance last time around he would love to find a finish but the 25 year old admits he will just be happy to have his hand raised at the end of the fight,

“A win is a win, so I’ll take anything. But of course, I’ll be looking at that finish. Hopefully, I get a knockout or submission. At the end of the day, the goal is to win whether it be via submission, knockout, or even decision.” 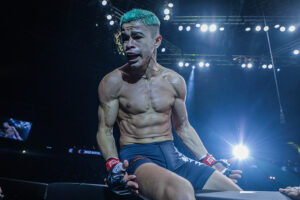