The curtain will finally come down on a long and glorious career on Saturday when John Wayne Parr has his farewell fight at ONE: ‘X’. ‘The Gunslinger’ has a record of 99 wins, 34 losses and 1 draw and hopes that he can end his career on a high with win number 100.

He faces mixed martial artist Eduard Folayang and wants to finish the fight in style,

“I’m looking for a knockout. I want to finish my career with a highlight-reel finish. And if not, I just want to get the win. I have 99 wins. I just need one more win to crack 100.”

After almost three decades in the sport it has been hard for Parr to come to terms with life outside of competing. But he realizes the time has come to call it a day and is determined to finish his career on a high note,

I’ll be really excited to get that monkey off my back and finally reach my potential and retire satisfied, knowing that I’ve given everything in my career,” he said. 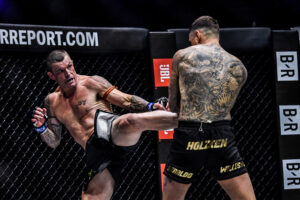 Parr is faced with a contrast in styles for his final match, facing former ONE Championship lightweight champion and wushu stylist Folayang. He is excited at the prospect of going up against an opponent who does not have a conventional Muay Thai or kickboxing style,

“This is ONE world champion versus Muay Thai world champion, so it doesn’t get any bigger. I’m very excited for the opportunity to share the circle with Eduard Folayang. It excites me to finish my career on a high against a legitimate champion. It makes me motivated to wake up in the morning and train hard.”

JWP also knows he will have to look out for his opponent’s spinning strikes,

“Mr Folayang is a legend, a superstar in the Philippines. And what he brings to the table is not your classic Muay Thai striking style. I’m expecting him to spin maybe once or twice.” Different styles bring different challenges and after a long and varied career Parr knows he can’t underestimate his opponent.

“I have to get my timing right so I don’t walk into anything silly. Not to be too cautious, but I have to be very wary of where I’m at the whole time with my range and distancing, When I attack, I have to make sure that I attack with purpose. Get in, get out. Don’t stay in the pocket too long in case I get caught with something crazy.”

But while Parr is wary of a potentially unpredictable opponent he feels his experience in Muay Thai will be a big advantage,

“If I can keep it to a pure Muay Thai game, I’ll be very hard to beat, so the advantage of this fight is that he’s coming into my world instead of me getting into his. I’m going to pick my shots and get the win.”

Whatever happens on the night, it will be an emotionally charged affair after such a long and colorful career, which has seen him compete at the highest levels. Parr has gone from from winning tournaments in Rajadamnern stadium to fighting Buakaw Por Pramuk in the K-1 Max finals and won a multitude of titles on the way.

With his 46th birthday rapidly approaching the veteran has finally come to terms with the prospect of hanging up his gloves to focus on bringing through the stars of tomorrow but he is ready to put his all into his final battle,

“When you win, and you get the crowd cheering your name, you get the adrenaline rush and the goosebumps on your skin, and then you get home, and you’re so excited that you can’t sleep for two or three days because of the high you got from the fight. I’m going to make sure that every ‘i’ is dotted, every ‘t’ is crossed, and I do everything I can to make sure that I sail off into the sunset riding my unicorn.”