Johnny Case has made some serious sacrifices in order to join the Korean Zombie‘s training camp. The Rizin veteran has had to spend two weeks in quarantine in Korea.

Case has fought several times in Japan for Rizin. But when he signed up to help Chan Sung Jung he wasn’t fully aware of the scale of the commitment involved,

“Zombie was a former teammate at the MMA Lab in Phoenix and my former striking coach and Zombie’s current coach, Eddie Cha, and Zombie thought I would be a good look for him this fight camp. To be honest I had no idea what I was getting myself into as far as the quarantine was concerned.” Sitting alone in a hotel room for two weeks would not be easy for anyone. But for a fighter who is accustomed to an extremely active daily routine it must be extremely tough,

“I freaked out a little at first. I didnâ€™t have time to prepare my mind for solitary confinement but this actually turned out to be a blessing in disguise!”

Case says that after a difficult start he was able to see the positives in the situation,

“Man Iâ€™m gonna be honest, I felt like a caged animal the first two days. Just something about knowing Iâ€™d have to be locked up alone for two weeks didnâ€™t sit well with me. But then I switched my perspective and realized how lucky I was to have the opportunity be alone and have zero distractions while I continue to work on myself.” 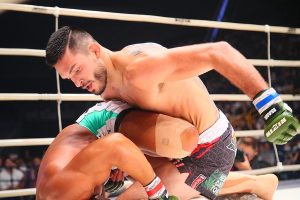 Case is familiar with Brian Ortega, who Jung will fight on October 17th. He believes his teammate will ultimately get his hand raised but thinks the fight will produce fireworks,

“I’ve seen most of his fights. I think Zombie matches up well with him. I think Zombie has much more tools at his disposal. But I know this is going to be a great fight for the fans.”

Anyone hoping that Case might extend his visit to Asia in order to fight for Rizin again is destined for disappointment. It sounds like the Americanâ€™s time fighting in Japan has come to an end,

â€œIâ€™m currently signed to the PFL but wonâ€™t be able to fight until the 2021 season due to covid. So I will be back fighting in the US.â€ While Caseâ€™s career is taking a slightly more conventional route he has nothing but good things to say about Rizin,

â€œI fu**ing loved fighting for Rizin. Itâ€™s the best show Iâ€™ve ever had the pleasure to fight in. The production is second to none. The fans are amazing, and the rule set was really exciting to fight under.â€

The 31 year old saw his three fight winning streak ended by Tofiq Musayev at Rizin 20. The lightweight from Azerbaijan was strongly linked with the UFC and Case feels he would have held his own against the top 155lbers there,

â€œTofiq is good, heâ€™s a world champion level fighter in any promotion.â€

With two young boys at home itâ€™s easy to see why the PFK was an attractive option for Case. We might not see him fighting in Asia again but he will be hoping to ensure one of the continentâ€™s top talents is at the peak of his papers on October 17th.