Jonathan Haggerty scored a very impressive decision win over Mongkolpetch Petchyindee at ONE: ‘Bad Blood’. But the English fighter is not going to be taking a break, he is already back in training and knows exactly who he wants to fight next.

Haggerty is ready to step in and replace Rodtang Jitmuangnon in the mixed rules bout with Demetrious Johnson at ONE: ‘X’. In the Covid-19 era fighters frequently have to pull out from fights and the Englishman is ready to step in if the Thai fighter withdraws,

“It might be written in the stars. As soon as I get back to the gym, I’m jumping straight on my MMA training. I think I’ll be a tougher fight for Demetrious Johnson in all God’s honest truth. I’m just more athletic. So we’ll see what happens,” he said. 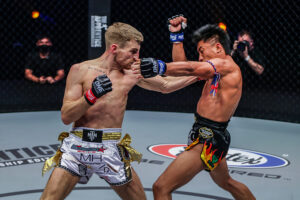 Even if the stars don’t align for Haggerty to fight Rodtang next month he still plans to transition to MMA eventually,

“I’m a born fighter. My dad’s got his own MMA gym and I’ve grown up around MMA fighters. I’ve been doing the basics for years. I did always say MMA will be the final goal. And why not have a roll about on the floor? It would be exciting,” he said. Mongkolpetch is a former Lumpinee champion but Haggerty says he is getting used to beating the top Thais at their own game,

“It does seem surreal but I’ve been fighting the top Thais now since I’ve had about 13 fights. I’m made for this. I’m born for this. It just goes to show that it doesn’t matter about experience. I know he kept banging on about experience, they all do but (that’s) until they get in there, and they feel my power.”