Mongkolpetch Petchyindee will be looking for his fourth straight ONE Championship win when he faces Elias Mahmoudi. The fight is being broadcast this Friday and the Thai thinks he needs just one more victory to secure a title shot,

“I’ve won three fights in a row (for ONE Championship) and if I can win this fight, I may get into the rankings and have a chance to challenge for the world title against Rodtang (Jitmuangnon) which is my ultimate goal,” he said.

Mongkolpetch is giving away 11cms in height to the Algerian at ONE: ‘Full Blast’ Part II. It is a significant difference but the Thai fighter thinks he can use it to his advantage,

“His weaknesses, as I can see, are his legs and chin. He is tall like Alaverdi Ramazanov, who fought Captain (his Petchyindee teammate) so we decided to use the same plan, aiming for his calf.” 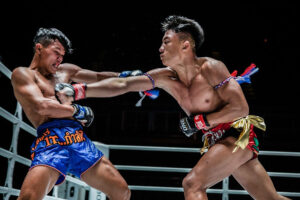 Mahmoudi has been in with both Lerdsila Champairtour and Petchdam Petchyindee since signing for ONE Championship. Mongkolpetch says him and his team have spent a lot of time studying the fight with the latter,

“Me and my trainers worked together to study the tapes of Elias’s previous fights carefully, especially the match between him and Petchdam. Even though they fought under kickboxing rules, we still can see his Muay Thai technique and his counter game plan.”

Mongkolpetch is a former Lumpinee super featherweight champion and Toyota Marathon winner. This fight will be catchweight contest with both men required to weigh in slightly above the normal flyweight limit. 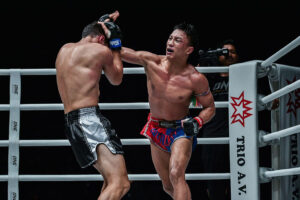 Given that he has his sights set on Rodtang it seems Mongkolpetch feels his future is at flyweight. A win over Mahmoudi would see him break into the top five for the first time.

Whether it would be enough to secure a title shot remains to be seen but Mongkolpetch wants to win in a way that gives the matchmakers no choice but to match him with Rodtang next. He has respect for the Algerian but warns that there will only be one man left standing at the end of the night,

“Elias has experience in both Muay Thai and kickboxing. He is a sharp and heavy-hitting striker, especially with his fists and elbows (but) I’ve focused on practicing my punch specifically for him. I’m going to knock him out.”