In the main event of Double G 7 in Seoul on Saturday night, history was made when Korean Zombie protege Jun Young Hong added another title to his mantle by defeating Gi Bum Moon and taking his AFC featherweight strap.

Hong pressured from the start looking to trap Moon along the fence. There was a lot of movement and numerous exchanges on the feet with not much landing. The Zombie MMA representative did find his range quicker and connected with kicks more often. They ended the round battling in the clinch.

This time around, Moon came out much more aggressive and put together boxing combinations that were quite effective. Either connecting with the right or left hand then mixing in the kick to the midsection.

Just when the audience thought the tide was turning, Hong smashed a short left hook counter that seemed to have his foe on wobbly legs. An ill-advised fly kneeing only allowed Moon to grab onto a single leg and recover in a safe position along the cage. 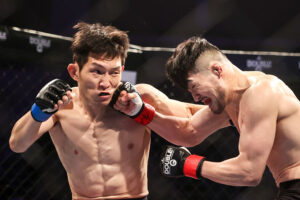 Eventually, they went back into the open and continued to trade on the feet. Hong established the centre again and picked up his output. In close quarters, he would dip and rip with hooks. Even though Moon would lunge in with flurries, Hong did a great job either countering or slipping out.

In good old fashioned ‘Korean Zombie’ style, these men went toe-to-toe leaving nothing in the gas tank for the final five minutes. Moon needing to get a finish was walking down Hong and throwing the kitchen sink. Hong stood his ground and threw back everything he had.

With 90 seconds left, he completed a double leg takedown and transitioned to the back to lock up the decision win. The 32-year-old Hong is now the AFC and Double G 145lbs champion and elevates to 11-6-1 while his opponent drops to 10-5.

In the most lackluster title fight of the show, Lim Yong Joo spent the majority of every round running away leading to multiple penalties. As a result Han Seul Kim easily captured the interim welterweight belt with a decision win.

Both fighters are known as counter-strikers and hesitated to throw the first punch. This meant Kim chased around Lim for long periods of time and there was very little action.

Kim gets redemption after dropping a split decision against Tae Ho Jin in a welterweight title fight at Double G 5. On the other hand, Lim drops to 1-4 as a professional. 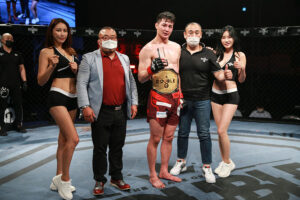 After Rae Yoon Ok left the organization to sign with ONE Championship the promotion needed a new lightweight champion. So Won Bin Ki and Sung Kwon Kim faced off for the vacant belt.

The start of the opening round was not a telltale sign of how the fight was going to play out. Both individuals were tentative and even received a warning from the referee for inactivity which ignited the action into a fever pitch.

Ki kicked into gear and found his range with strikes. A solid combination, followed by an uppercut and debilitating body shots had Kim on the back foot and looking to recover. 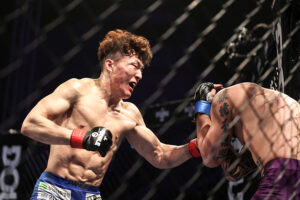 Early in the second round, Ki landed a counter right hand that flattened Kim. ‘The Danger’ jumped into the guard only to be met with an armbar. Luckily, it was not deep and he slipped out easily and took the back. They sat in that position for an extended period with Ki punching sparingly. Kim patiently waited and slipped out to get back to his feet.

With the cobwebs shaken off, Kim came back and dropped his opponent with a thudding left hook. Ki ate a barrage of punches but immediately grabbed the single leg. He ended the round attempting a kimura from half guard.

After two thunderous rounds, they entered the final frame beaten up and bruised. Looking to counter, Ki connected perfectly with an overhand right. Kim stumbled back visibly rocked and covered up. That opened up the body and Kim dug hooks to the ribs on both sides, finishing the fight.

Ki (14-7) snatches up the lightweight belt after coming up short on his previous attempt at Double G 5 while Kim (5-7) has now lost four of his last five. 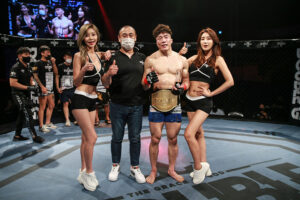 The atomweight title fight between Bo Hyun Park and Ye Rin Hong was action-packed while it lasted. Both fighters rushed out to the center of the cage with aggression yet it was the former who struck first with a speedy combination.

‘Witch’ then clinched her opponent and trapped her against the fence. For the next few minutes, she controlled Hong and peppered her with knees and punches.

Even though Hong was able to reverse position, Park quickly created space and separated. After a few exchanges on the feet, Park hit another slick combination and slid under for a takedown. 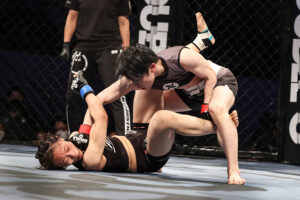 Hong attempted an omoplata Park stayed patient and slid past the submission. Once in side control, the West Gym staple stood back up and threw down heavy punches. They scrambled and Park was able to take the back and flattened her out.

After a failed rear-naked choke attempt, Park remained on top and slammed down strikes. With Hong in a daze, Park sunk in the choke again and this time the tap came shortly thereafter.

Park (4-1) picks up her second straight submission victory while being crowned the inaugural atomweight champion. Meanwhile, Hong (3-2) snaps a three-fight win streak and goes back to the drawing board.