A featherweight fight between two Top FC veterans has been added to the Annihilation 1 card. Jun Young Hong will face Byung Hee Lim in Seoul on January 19th.

Young Hong (8-5) challenged for the TFC interim 145lbs title last year but was stopped in the fourth round by top Korean prospect Sung Bin Jo. He has since bounced back to beat Malaysian journeyman Jian Kai Chee.

The Korean Zombie MMA prospect faces fellow Korean Hee Lim (3-3) at the KBS Arena. Like Young Houn, he is a Top FC veteran and will be looking to bounce back after suffering a stoppage loss at the hands of Yoshifumi Nakamura last time out.

As previously announced the card will also feature a light heavyweight bout between Kim Doo-Hwan and Andrei Lenzhen. There will also be a boxing match with a regional title on the line as Jung Kyoung Lee faces Samuel Colomban Kaldjob for the vacant OPBF 154lbs strap. 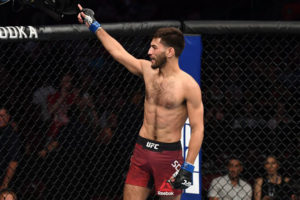