Jung Da-Un wins at Way of the Dragon 3

The Taiwanese mixed martial arts scene is alive and kicking. On a weekend where the combat sports world was very quiet, in the city of Taipei, Way Of The Dragon put on their action-packed third show.

The headliner had Korean Top Team’s Jung Da-Un taking on Russian prospect Abutalib Khalilov in the light heavyweight division. Although the pace was set early by Khalilov, he eventually slowed down and Jung took over to pummel him late in the second with devastating ground strikes.

Khalilov began the first round circling almost at a sprint, darting in and out on Jung with spinning attacks and combinations. Occasionally, a punch got through but nothing too damaging was landed by Khalilov. The young South Korean seemed to be biding his time and trying to counter while staying patient for most of the period.

Beginning of the end

The game plan noticeably changed when Jung came out for the second stanza. He rushed forward and pressured Khalilov toward the fence. This time around, Khalilov tried to work his jab and threw kicks to keep Jung at a distance.

While Khalilov was jumping for a takedown, Jung was able to slide away but was chased and got his back taken. Using his fighter intelligence, Jung got on all fours and was able to slither his foe off his back and obtain the top position. He then moved into side control and that was the beginning of the end.

The 25 year old South Korean methodically advanced into the crucifix position and commenced to elbow and punch Khalilov until the referee saw enough.

Jung gives Khalilov (4-1) the first loss of his career and moves his record to 10-2. The current HEAT light heavyweight champion is on a nine-fight win streak and therefore it would be no surprise if he gets signed by a bigger organization like the UFC or ONE Championship in the near future.

In the co-main event, it was the story of a young prospect taking out the gritty veteran. British ground specialist Shaqueme Rock took on Taiwanese MMA pioneer Rocky Lee and choked him unconscious in the opening frame.

Lee looked to implement a clinch-heavy game against the fence from the beginning of the opening bell. Locking up the underhook on one side and punching Rock in the face was working superbly for most of the round.

With a little over a minute left in the first, Rock switched positions and tried for a takedown. That failed takedown led to Rock getting the back and slamming Lee to the ground. He immediately locked in both hooks and grabbed the neck like a snake. It was just a matter of time until Lee couldn’t hold off the choke and went to sleep with his face on the canvas.

While Rock stays undefeated and upgrades to 4-0, Lee suffers the first submission loss of his career and drops to 4-5. This victory is the highest profile name so far for the Monarchy MMA representative, earning himself a reputation in South East Asia as one of the rising up and comers. 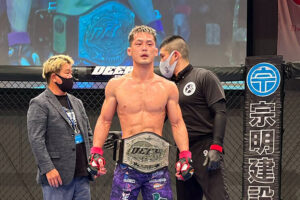