Kai Asakura will defend his bantamweight title against Kyoji Horiguchi at Rizin 26 on New Yearâ€™s Eve in an eagerly anticipated rematch.

Having enjoyed a stellar UFC career as well as being the former champion, Horiguchi is widely viewed as one of the greats of Japanese MMA. Although the fight was not for the title, Asakura still shocked the world in 2019 when he left the champ flat on the canvas with barely a minute gone.

Horiguchi has not fought since. The pair were due a rematch last New Yearâ€™s Eve at Rizin 20 but it was cancelled due to what would be a long-term knee injury for the American Top Team man. Now that the pair will finally have their rematch with the belt on the line, Asakura is anticipating something special,

â€œI think it will be most historic fight in recent Japanese MMA. I think this is the best match Japan has ever seen in the past five years.â€

Asakura is undoubtedly a huge talent and has enjoyed a stellar year in 2020. He won the vacant belt at Rizin 23 with a soccer kick finish against Hiromasa Ougikubo and defended it the following month with another first-round soccer kick, this time against Shoji Maruyama at Rizin 24. Although the 27-year-old says that he is not a football fan he has a habit of finishing fights with soccer kicks. Asakura says this is one of the advantages of competing under Rizin rules,

â€˜â€œI am starting be able to dictate the fight and see things more clearly, so I am calm during these moments and function properly. I like to use my soccer kicks so I prefer the rules that allow them.â€

Given Horiguchiâ€™s status in the sport, along with his own rapidly growing reputation as the new champion, Asakura is relishing the stakes at play and heâ€™s gearing up to make a big statement, describing the reason the bout is so special as,

â€œThe whole story that leads to this fight. A rematch after a huge upset. And Iâ€™ve gotten much better since. I am very confident in beating him again.â€ 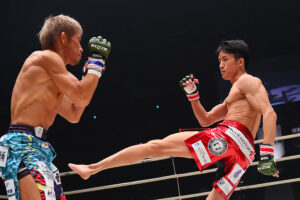 Horiguchi established himself as one of the best flyweights in the UFC before signing with Rizin and Asakura would like to receive this level of international recognition,

â€œIt will prove my strengths as a champion and determine the best Japanese bantamweight. The plan is to send a message to the global audience. I want to knock him out again and put my name out on the international mat.â€

With a record that stands at 16-2 and an 82% finishing rate, Asakura has made no secret of his desire for bigger fights beyond this one,

â€œI want to challenge outside of Japan. Iâ€™d like to go after that Bellator belt,â€ he said.

If he is able to finish Horiguchi for a second time then a cross-promotional title tilt with Bellator could indeed be on the cards.