Kanako Murata is one of the most highly-regarded female mixed martial artists coming out of Asia. The Japanese star is the former Invicta FC strawweight champion and came into her UFC debut clash with Randa Markos riding an eight-fight winning streak.

In contrast, the 35-year-old Markos arrived on the back of a two-fight skid and the veteran was outclassed by the tenacious grappling of her opponent.

Murata established her range early and was able to close the distance to clinch with the veteran. She was able to assert her dominance with a neat trip before applying her signature top pressure. Looking well in control, she was able to rain down some aggressive elbows and punches as she finished the round in total control.

Showing the power in her debut!

In the second round, Murata was more methodical with her shots. Again, the pair clinched up, but Markos was able to fend off the takedown attempts, as well as dish out some potent leg kicks. On the breakaway. Sensing a big finish to the round, Murata was able to secure the double leg and looked to squeeze a front head lock before Markos battled back to her feet.

Murata scored another takedown with a trip in the third as she continued to showcase her grappling prowess. From there she sought to finish the fight with what looked like a tight D’Arce choke. She later attempted a north south choke, but Markos was able to evade the finish. The ground control from Murata was an ongoing feature and she scored some damage with a combination of punches and elbows from the top. 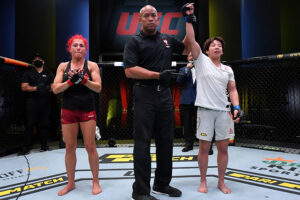 Having finished the contest in side control, Murata’s inaugural UFC win was inevitable with all three scoring the fight in her favour. After that fight she said,

“Just to win my UFC debut makes me so happy. I learned a lot fighting a veteran with experience like Randa Markos. I don’t mind fighting anyone, I just want to keep winning and climbing step by step.”