On the early prelims of UFC 241 at the Honda Center in Anaheim, Kang Kyung-Ho intelligently switched up the game plan to defeat Brendan Davis by split decision.

Both fighters spent time gauging distance and traded kicks to initiate the action. After a failed takedown attempt by Kang, he started to find a home for his jab while Davis targeted the lower legs.

One of those perfectly placed calf kicks dropped Kang and there was noticeably damage developing. But the Korean went back to snapping that jab and connected solidly with a right straight that floored his foe.

Kang swarmed while Davis rolled backwards and ended up in mount. With less than a minute left in the round, Davis held on and stayed safe from any punishing shots.

During a takedown attempt to start the second round, Kang almost had his back taken but was able to shake off Davis and fall into closed guard. Attempting to pass, the American connected with an upkick and created a scramble to get out of a bad spot. After getting back upright, Davis hit a clean combination and Kang returned fire to knock the mouthpiece out. For the next minute, the American continued without protection but luckily Kang was hindered by the continuous shots to the calf.

With his leg clearly limiting his movement and the fight closely contested, Kang changed up his approach entering the final five minutes. Davis came out firing and eventually slipped after a high kick which allowed his foe to jump into side control.

The referee did not give much time to mount any offense and stood up the fighters quite fast. Yet that did not keep the contest on the feet. Kang dumped Davis to the mat two more times and controlled from top position.

Even though offense was in short supply, Kang kept his lower left leg from sustaining more injury to secure the split decision at the end of fifteen minutes.

Kang (16-8) has accumulated a record of 4-1 since returning to the UFC bantamweight division after his compulsory stint in the Korean military. Davis (10-7), on the other hand, has lost four out of six with the organization. In a post-fight scrum, the 30-year-old showed interest in returning at UFC on ESPN+ 23 in Busan, South Korea at the end of the year and had a name in mind.

“I definitely, 100 percent want to be on the South Korea card at the end of the year, I want a ranked bantamweight on that card, it’s in my hometown so it would be amazing.”

He also added, “I want a ranked fighter next. If I had a choice, it would be Urijah Faber.”

The co-main event saw the return of Nate Diaz (20-11) facing off against former UFC lightweight title-holder Anthony Pettis (22-9) in a welterweight showdown. The Stockton native proved that ring rust would not be a factor and overwhelmed his opponent to obtain the unanimous decision.

The headline between Daniel Cormier (22-2) and Stipe Miocic (19-3) for the heavyweight title was a grueling affair with the former champion recapturing his strap via fourth round technical knockout against the fence. 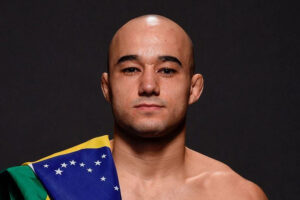