Kanna Asakura fought for the Rizin super atomweight belt when she was just 21 years old. Standing across from her was the current champion, Ayaka Hamasaki.

It didn’t work out for Asakura on that occasion, with the young star losing via armbar submission in the second round. More than two years on from that loss she is being given another crack at the belt and another chance to get the best of Hamasaki at Rizin 27.

The title fight will headline the card and Asakura is grateful for the opportunity,

“Things are going great. I am enjoying every second of my life. I am very appreciative that Rizin has chosen women’s MMA as the main event. I want to put on a performance where the main event takes all the impressions away from the event,” she said. It’s a golden age for 105-108lbs female fighters, particularly in Asia. Asakura is one of many exciting emerging talents and is proud of the role she has played in building the scene,

“I feel that there are much more contestants who are younger than me now. Which means that more girls are competing in MMA. I’m not satisfied yet, so I hope to continue to be a part of this momentum in Japan’s women’s MMA scene,” she said.

Since the first bout with Hamasaki, both fighters have put together strong runs. Asakura has lost one and won five, coming out victorious in her last four.

Hamasaki, meanwhile, has lost one and won four, with her last victory coming via submission against Miyuu Yamamoto as she clinched title which Ham Seo Hee vacated to sign with ONE Championship. 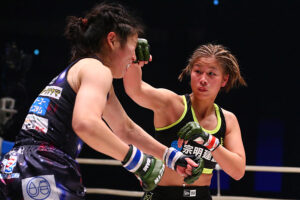 Asakura won’t comment on whether Hamasaki has improved but feels she has made significant strides since they first fought at Rizin 14,

“I’m not sure about my opponent, but I feel that I have grown significantly both mentally and physically as a fighter,” said Asakura.

Asakura has 18 wins to her name and is confident of scoring another on Sunday even if she doesn’t know how the fight will finish,

“I can’t tell you how, but I will extend my winning streak to five.” 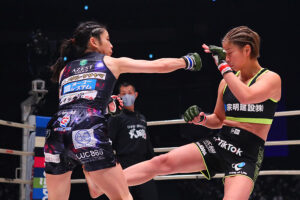 She might be confident of getting the victory but Asakura has massive respect for her opponent.

“I believe that Hamasaki is without a doubt the best fighter in the world, so by beating her I know I will become a real champion,” said the challenger.

Asakura made her Rizin debut in 2016 and has been on the roster ever since. She has grown with the promotion and describes it as a ‘special place’,

“I am very grateful to be able to fight consistently during times where not all fighters get to show their performances in front of a big crowd, and I am happy to be able to keep winning the fights I fought. Rizin is a place I grew up in. It’s a special place where I get to shine at my brightest.”