Seo Hee Ham currently holds the Road FC atomweight title as well as the Rizin super atomweight belt. She is at the top of her game and has bounced back strongly after an underwhelming UFC stint.

In 2017 Ham was released by the UFC after a 1-3 with the organization. Despite competing at a higher weight class she went the distance in all four fights and was unfortunate with a couple of the decisions.

Having subsequently won titles with both Road FC and Rizin the 33 year old has staked her claim to be the best female fighter in the division. But the 33 year old is not getting carried away despite her recent success,

“There are fighters around the world that are stronger than me and there are many fighters I have not stepped in the cage against so it is hard to say (who is the best) but I’ve never thought about it.” 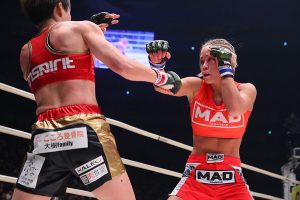 Ham successfully defended the title by knocking out Jinh Yu Frey six months later. But she had to wait another year before her next fight, defeating Park Jung Eun at Road FC 51 in late 2018.

Road FC’s roster contained no more challenges for Ham. But her greatest antagonist was sitting across the East Sea in the country of Japan.

Ayaka Hamasaki, who holds two victories over Ham, was ruling the Rizin super atomweight division. Having been granted permission by Road FC to fight for the Japanese promotion she was determined to avenge those defeats,

“I spent the last six months of 2019 in a continuous training camp. All I did was work out,” she recalls.

At Rizin 17 she stopped another former Deep-Jewels atomweight champion, Tomo Maesawa, in the opening round. Ham had to wait just three months for her next assignment.

At Rizin 19 she was matched with Miyuu Yamamoto. Ham aced the assignment, finishing a very recognizable opponent late in the second round.

This earned her a showdown with Hamasaki at Rizin 20 on New Year’s Eve. It was one of the closest title fights in recent memory for the organization.

As they tangled on the feet, shots were landed on both sides and difficult to determine who had the edge. On the canvas, each fighter had their moments in a dominant position.

Ham walked out of the ring with a razor-thin split decision and the Rizin super atomweight title wrapped around her waist.

“Every aspect (of the fight) was an obstacle I had to overcome. Ayaka is great in every way possible. I was very fortunate to get the win that night. Even though I won the fight, I am not satisfied with my performance. I wish I could have kept my composure better.” 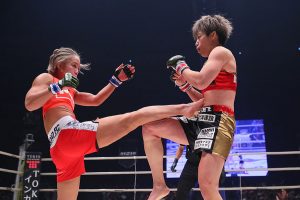 Naturally, the identity of the next challenger is a topic of debate. After a disputable outcome against Hamasaki the possibility of a fourth fight has been mooted and Ham thinks it is inevitable,

“Another fight with Hamasaki will happen. From my perspective and probably Akaya’s too, this is a fight that needs to be put together.”

Another contender, Rena Kubota, has also thrown her name into the mix recently. In a recent interview she spoke about the idea of challenging Ham for the title.

In 2012, the Japanese superstar defeated Ham at Shoot Boxing Girls S-Cup via majority decision in the extra round. They competed under Shoot Boxing rules, a hybrid of shoot wrestling and kickboxing allowing strikes with standing submissions.

Eight years have passed and both fighters have evolved into better versions of themselves.

“I want to fight Rena too. Rizin has completely different rules. This is not Shoot Boxing so the result will be different I believe,” Ham said.

With Japan gradually reopening Rizin could be back up and running in the next couple of months. As the only champion currently on the roster Ham must feature prominently in these plans.

Having fought three times in 2019 she still hasn’t had the opportunity to compete this year. But when the time comes Ham promises to provide entertainment,

“No matter who my next challenger is, expect a fun fight.” 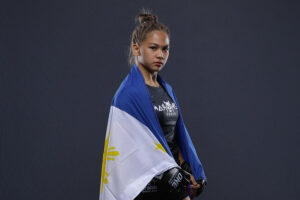