Yuki Kawana needed less than five minutes to be crowned as the new lightweight titleholder in the main event of Shooto 0712 on Sunday. The 30-year-old knocked out Shutaro Debana in the opening round with a ferocious offensive display in Osaka.

Some pundits expected the encounter to be a classic clash between a striker and a grappler but both men opted to trade blows at the start of the fight. Debana, a multiple time judo champion, was clearly not in his comfort zone, but elected to trade blows with Kawana.

Kawana used his footwork to stay clear of Debana’s forward surge and then started to find the gaps in his foe’s defense with sharp counterpunches. He capitalized on the openings ‘Captain Africa’ left with his wide hooks by uncorking his signature overhand right. 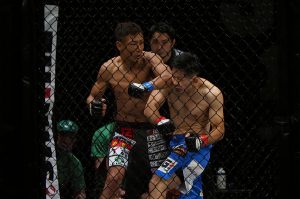 It did not stop Debana’s charge into the fray, but his willingness to exchange with Kawana ultimately proved his downfall. The latter timed a left lab and followed up up with a right straight that sent Debana to the canvas.

One last clobbering right hand from Kawana to the defenceless Debana sealed the deal at the 3:48 mark of the opening stanza. With the victory he improved his professional record to 16-4-5 and logged his name as the 13th lightweight championship in the promotion’s history,

“This is my redemption. I thought this day would never come, but it finally happened. Now, I hope everyone can now pay their attention to me. I am now the champion,” he said in Japanese after the fight.

Debana drops to 5-3 and sees his two fight winning streak snapped. It was the third time he has been stopped since transitioning from judo to MMA in 2017. 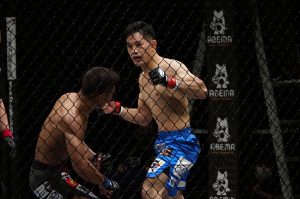 In the co-main event, Ryuya Fukuda captured the biggest win of his mixed martial arts stint as he thwarted former featherweight King Of Pancrase Yoshiro Maeda to capture the interim Shooto flyweight belt.

Maeda’s game plan was clear from the outset as he looked to close the distance and secure a takedown. Fukuda was eventually taken down but secured top control and teed off with a plethora of punches to the head.

Fukuda was able to nullify Maeda’s grappling in the second round and he started to impose his own game plan. The younger man chopped down the lead leg of the veteran with lashing kicks that resulted to a bruising reddish mark on the thigh.

Maeda was persistent with his chain wrestling in order to break the on-feet sequences, charging Fukuda for a takedown in the early moments of the third frame. But the latter recognized the danger his opponent posed on the ground.

Fukuda powered out of his predicament by using the cage fence and swept his rival to wind up on top. He unloaded a torrent of punches which caused the referee to step in and wave it off with three seconds left on the clock.

In his post-fight interview, Fukuda said he held Maeda in high regard and expressed his gratitude towards the Japanese MMA legend. The newly crowned interim champion improves to 12-5-1 while his opponent drops to 38-18-5.

Yusuke Yachi says he is back from rock bottom