Keito Yamakita was crowned the new strawweight King of Pancrase in Tokyo on Monday. He secured a unanimous decision win over former champion Daichi Kitakata a to claim the title and underline his credentials as one of Japan’s best prospects.

The 25-year-old’s previous fights have come into the Pancrase 328 headliner with an undefeated record but just six fights to his name. By contrast Kitakata has fought for several of Asia’s biggest promotions, has more than 30 fights under his belt and is coming off a win over Yutaro Muramoto at Rizin 34.

Kitakata edged the opening round, landing left and right hooks. He was caught with a double leg in the centre of the cage but was able to reverse the position and later showcased strong top pressure while scoring with elbows. 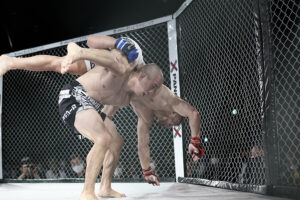 The second stanza swung back the way of Yamakita. The Shinjuku-based fighter got the better of the ground exchanges and took the back of his opponent while  landing some clean punches.

Yamakita continued to show off his grappling prowess in the third and controlled his opponent up against the cage as he landed ground strikes. The pendulum swung again in the fourth but it was a close round as both fighters put in solid work on the canvas.

Kitakata landed some stiff ground and pound and controlled the back of Yamakita in the final stanza but it wasn’t enough to turn the tide as the younger man walked away with the belt courtesy of a split decision win.

With the win Yamakita’s record improves to 7-0. Kitakata drops to 20-11-1 but will be hoping for an immediate rematch given how close the contest was. 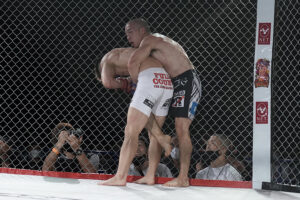 Tokitaka Nakanishi (9-3) was crowned the interim featherweight champion with a third round submission win over Kamei Shinsuke (5-3). The 25 year old, who has fought his entire career for Pancrase, paid the price when he lost his balance moving in for a punch.

Shinsuke was taken down and locked in a vice-like body lock as Nakanishi secured the rear naked choke which extends his winning streak to four and sees him become the interim featherweight King of Pancrase.