Song Kenan is set to return on March 20th. The Chinese welterweight will be looking for his third straight UFC win when he faces Max Griffin at an undisclosed location.

Kenan (16-5) has won four fights out of five since signing for the UFC in 2017. He was last in action at UFC Auckland where he scored a first round stoppage win over Callan Potter.

Griffin (16-8) has won four fights out of ten for the UFC. He was a contestant on TUF 12 in 2012 but had to wait another five years to earn a contract with the promotion.

Recent UFC cards have been held at either the Apex Centre in Las Vegas or Yas Island in Abu Dhabi. Live audiences have not been permitted to attend any of these events.

No venue has been confirmed for this event. This is the only fight currently on the card.

Kenan Song excited about the prospect of fighting in China again 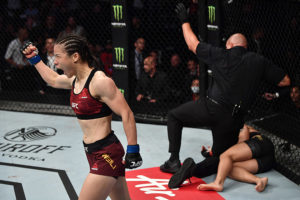