The 30-year-old put on an all-around performance, shutting out the Polish heroine en route to a clear-cut unanimous decision with scorecards reading 30-26 across the board.

For the entirety of the women’s strawweight showdown, Yan looked a step ahead on all fronts as she easily prevented Kowalkiewicz from employing her own offense, while also picking her opponent apart with crisp boxing combinations. 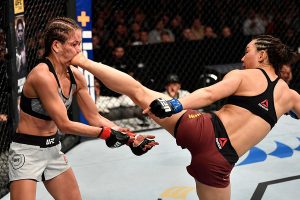 Yan landed a solid punch to Kowalkiewicz’s eye that immediately caused noticeable trouble with her vision. She was questioned by the ringside physician after the first round but was allowed to continue.

Kowalkiewicz tried valiantly to pull off the victory in the third round, pressuring Yan and committing a lot of time and effort to a leg lock. But she could not find a path to complete the comeback, losing for the fourth time in a row and dropping to 12-6.

Meanwhile, Yan improved her MMA record to 12-1. In addition, she remains unbeaten over her past 11 fights going back to her sole career loss, which came in September 2010.

Song patiently waited for the right moment to pounce on his seasoned counterpart. When he saw a good opening to strike, the Chinese dropped Potter to the canvas with a stiff right hand.

A few punches from Song soon followed, but the referee was quick to jump in at the 2:20 mark of the opening salvo and rescued Potter before any further damage could be inflicted.

Following his scintillating win, Song admitted that he went through a tough training camp. He had to be separated from his family after he was forced to leave his home country due to the outbreak of the coronavirus.

The end result still paid off, however, as Song authored a highlight-reel victory. In his post-fight interview, he gave his heartfelt support to the people back home who are still suffering through the spread of the disease that has claimed more than 2,000 lives.

“It was a bit difficult for [this training camp] because of the Chinese virus situation,” Song said. “I would like to say stay strong China. Stay strong Wuhan!”

Thailand’s Loma Lookboonmee (4-2) fell short in her bid to clinch her second-straight win under the UFC banner, yielding to replacement opponent Angela Hill (12-7) of the United States by way of unanimous decision in a three-round women’s strawweight scrap.

Hill put her height and reach advantage to good use as she kept Lookboonmee out of range for the majority of the encounter, and the Thai standout had difficulty closing the distance.