Keremuaili Maimaitituohati is set to compete on Dana White’s Contender Series in October. The Chinese featherweight will be looking to earn a spot on the UFC roster.

Maimaitituohati (24-8) is riding a six fight winning streak with WLF in China. He is coming off a decision win over UFC veteran Buren Wuliji.

Maimaitituohati has also fought once for ONE Championship and twice for ONE Hero Series. He has beaten some of China’s top featherweights although his results against international opposition have been more mixed.

Dana White’s Contender Series was scheduled to hold events in China in 2020 using the UFC Performance Institute in Shanghai as a base. The pandemic put paid to those plans and every season to date gas taken place at the Apex Centre in Las Vegas.

Season 5 is scheduled to get underway in August with all the fights taking place at the Apex Centre. While Dana White’s Contender Series won’t be coming to China it appears Chinese fighters will be getting the opportunity to showcase their talents in Las Vegas. 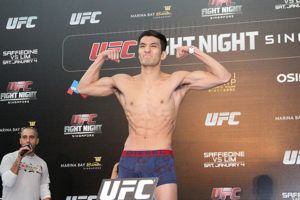